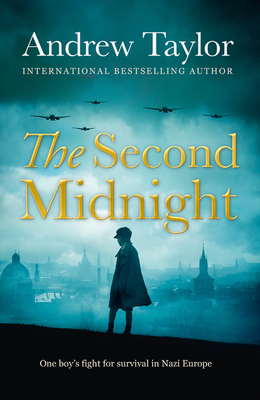 A secret mission...
1939. As Europe teeters on the brink of war, Alfred Kendall is tasked with carrying out a minor mission for the British Intelligence Service. Travelling to Prague, he takes his troubled young son, Hugh, as cover.

A terrible choice...
When Hitler invades Czechoslovakia, Alfred is given an ultimatum by the Czech Resistance. They will arrange for him to return to England, but only if he leaves his son Hugh behind as collateral.

A young boy stranded in Nazi terrain...
Hugh is soon taken under the wing of a Nazi colonel - Helmuth Scholl. But even though Scholl treats Hugh well, his son, Heinz, is suspicious of this foreigner. And as the war across the continent intensifies, they are set on a path that will ultimately lead towards destruction...

Andrew Taylor is the author of a number of crime novels, including the ground-breaking Roth Trilogy, which was adapted into the acclaimed TV drama Fallen Angel, and the historical crime novels The King's Evil, The Fire Court, The Ashes of London, The Silent Boy, The Scent of Death and The American Boy, a No.1 Sunday Times bestseller and a Richard & Judy Book Club Choice.He has won many awards, including the CWA John Creasey New Blood Dagger, an Edgar Scroll from the Mystery Writers of America, the CWA Ellis Peters Historical Award (the only author to win it three times) and the CWA's prestigious Diamond Dagger, awarded for sustained excellence in crime writing. He also writes for the Spectator and The Times.He lives with his wife Caroline in the Forest of Dean.
or
Buy Here
(This book is on backorder)
Copyright © 2020 American Booksellers Association