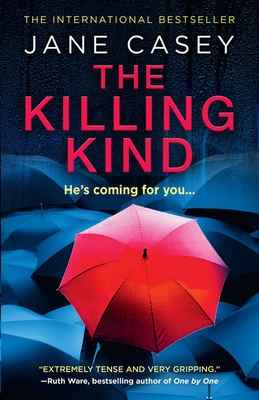 "Extremely tense and very gripping with a killer 'what if' your stalker claims to be the only person who can save you - what if this time he's telling the truth." -Ruth Ware, New York Times bestselling author

He tells you you're special...
As a barrister, Ingrid Lewis is used to dealing with tricky clients, but no one has ever come close to John Webster. After Ingrid defended Webster against a stalking charge, he then turned on her - following her, ruining her relationship, even destroying her home.

He tells you he wants to protect you...
Now, Ingrid believes she has finally escaped his clutches. But when one of her colleagues is run down on a busy London road, Ingrid is sure she was the intended victim. And then Webster shows up at her door...

But can you believe him?
Webster claims Ingrid is in danger - and that only he can protect her. Stalker or saviour? Murderer or protector? The clock is ticking for Ingrid to decide. Because the killer is ready to strike again.

Praise for The Killing Kind

'One of my favourite writers' Dervla McTiernan

'One of those 'just one more page' books' Susi Holliday

Jane Casey has written ten crime novels for adults and three for teenagers. A former editor, she is married to a criminal barrister who ensures her writing is realistic and as accurate as possible.This authenticity has made her novels international bestsellers and critical successes. The Maeve Kerrigan series has been nominated for many awards: in 2015 Jane won the Mary Higgins Clark Award for The Stranger You Know and Irish Crime Novel of the Year for After the Fire. In 2019, Cruel Acts was chosen as Irish Crime Novel of the Year at the Irish Book Awards. It was a Sunday Times bestseller.Born in Dublin, Jane now lives in southwest London with her husband and two children.
Loading...
or support indie stores by buying on