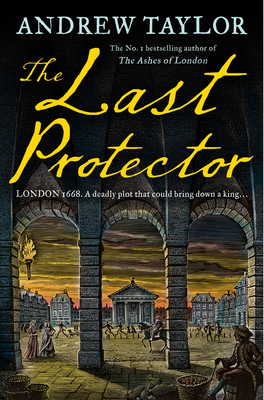 From the No.1 Sunday Times bestselling author of The Ashes of London comes the next book in the phenomenally successful series following James Marwood and Cat Lovett.

Brother against brother. Father against son. Friends turned into enemies. No one in England wants a return to the bloody days of the Civil War. But Oliver Cromwell's son, Richard, has abandoned his exile and slipped back into England. The consequences could be catastrophic.

James Marwood, a traitor's son turned government agent, is tasked with uncovering Cromwell's motives. But his assignment is complicated by his friend - the regicide's daughter, Cat Lovett - who knew the Cromwells as a child, and who now seems to be hiding a secret of her own about the family.

Both Marwood and Cat know they are putting themselves in great danger. And when they find themselves on a top secret mission in the Palace of Whitehall, they realize they are risking their lives...and could even be sent to the block for treason.

'One of the best historical crime writers today' The Times

'This is historical crime fiction at its dazzling best' Guardian

'One of the best historical novelists around' Sunday Times

'A breathtakingly ambitious picture of an era' Financial Times

'A masterclass in writing for the genre' Ann Cleeves

'Andrew Taylor is one of our finest storytellers' Antonia Hodgson

'A novel filled with intrigue, duplicity, scandal and betrayal, whose author now vies with another master of the genre, C. J. Sansom' Spectator

'A most artful and delightful book, that will both amuse and chill' Daily Telegraph

Andrew Taylor is the author of a number of crime novels, including the ground-breaking Roth Trilogy, which was adapted into the acclaimed TV drama Fallen Angel, and the historical crime novels The Ashes of London, The Silent Boy, The Scent of Death and The American Boy, a No.1 Sunday Times bestseller and a 2005 Richard & Judy Book Club Choice.He has won many awards, including the CWA John Creasey New Blood Dagger, an Edgar Scroll from the Mystery Writers of America, the CWA Ellis Peters Historical Award (the only author to win it three times) and the CWA's prestigious Diamond Dagger, awarded for sustained excellence in crime writing. He also writes for the Spectator and The Times.He lives with his wife Caroline in the Forest of Dean.
Loading...
or support indie stores by buying on