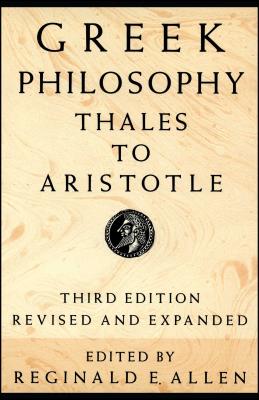 Widely praised for its accessibility and its concentration on the metaphysical issues that are most central to the history of Greek philosophy, Greek Philosophy: Thales to Aristotle offers a valuable introduction to the works of the Presocratics, Plato, and Aristotle.
For the Third Edition, Professor Allen has provided new translations of Socrates' speech in the Symposium and of the first five chapters of Aristotle's Categories, as well as new selections bearing on Aristotle's Theory of Infinity, Continuity, and Discreteness. The book also contains a general introduction which sets forth Professor Allen's distinctive and now widely accepted interpretation of the development of Greek philosophy and science, along with selective bibliography, and lists of suggested readings.

Reginald E. Allen is professor of classics and philosophy at Northwestern University. He is the author of Plato's Parmenides: Translation and Analysis, Socrates and Legal Obligation, and Plato's Symposium.
Loading...
or
Not Currently Available for Direct Purchase