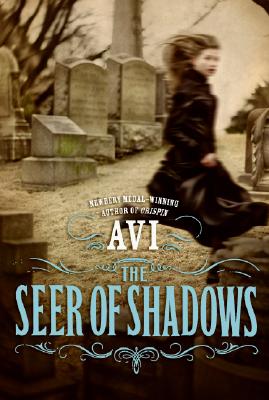 The Seer of Shadows

Newbery Medalist Avi weaves one of his most suspenseful and scary tales—about a ghost who has to be seen to be believed and must be kept from carrying out a horrifying revenge.

The time is 1872. The place is New York City. Horace Carpetine has been raised to believe in science and rationality. So as apprentice to Enoch Middleditch, a society photographer, he thinks of his trade as a scientific art. But when wealthy society matron Mrs. Frederick Von Macht orders a photographic portrait, strange things begin to happen.

Pegg, the Von Machts' black servant girl, then leads him to the truth about who Eleanora really was and how she actually died. Joined in friendship, Pegg and Horace soon realize that his photographs are evoking both Eleanora's image and her ghost. Eleanora returns, a vengeful wraith intent on punishing those who abused her.

Rich in detail, full of the magic of early photography, here is a story about the shadows, visible and invisible, that are always lurking near.


Praise For The Seer of Shadows…

“This tale proves that the time-honored ghost story, capably researched, well-paced and fusing the Gothic elements of mystery, madness and romance, can still thrill in the hands of a skilled craftsman.”
— Kirkus Reviews

“In perhaps his best work yet, Avi has created a truly chilling tale that will stay with the reader long after the last page is turned and the lights are turned out.”
— Children's Literature

Avi is the award-winning author of more than seventy-five books for young readers, ranging from animal fantasy to gripping historical fiction, picture books to young adult novels. Crispin: The Cross of Lead won the Newbery Medal, and The True Confessions of Charlotte Doyle and Nothing But the Truth were awarded Newbery Honors. He is also the author of the popular Poppy series. Avi lives outside Denver, Colorado. You can visit him online at www.avi-writer.com.