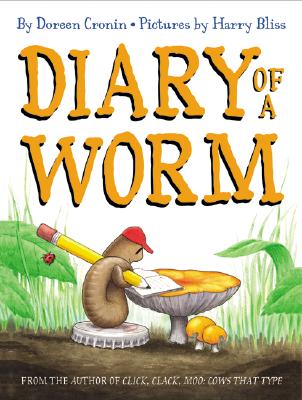 Diary of a Worm

This hilarious picture book from the bestselling, acclaimed author-illustrator team of Doreen Cronin and Harry Bliss tells the adventures of a worm through his daily diary entries.

This is the diary of a worm. This worm lives with his parents, plays with his friends, and even goes to school. But unlike you or me, he never has to take a bath, he gets to eat his homework, and because he doesn't have legs, he just can't do the hokey pokey—no matter how hard he tries.

Read the other books in the series: Diary of a Fly and Diary of a Spider!

New York Times bestselling artist Harry Bliss is a cartoonist and cover artist for the New Yorker magazine. He is the author and illustrator of Bailey and Luke on the Loose and the illustrator of A Fine, Fine School by Sharon Creech, Which Would You Rather Be? by William Steig, Diary of a Worm by Doreen Cronin, and Louise, The Adventures of a Chicken by Kate DiCamillo. His self-titled single panel gag cartoon Bliss appears in newspapers internationally. He lives in New Hampshire. You can visit him online at www.harrybliss.com.