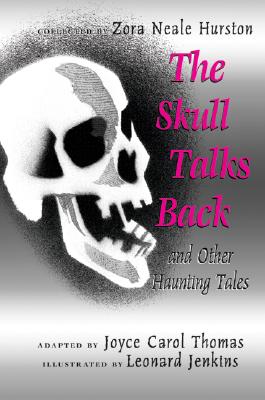 The Skull Talks Back

And Other Haunting Tales

Do you dare
to cross paths with ...

An enchantress who can slip
in and out of her skin,
A man more evil than the devil,
A skull who talks back,
A pair of creepy feet that can
walk on their own?


Spooky, chilling, and fantastical, this collection of six scary tales will send shivers up your spine!

The stories in the skull talks back have been selected from Every Tongue Got To Confess, Zora Neale Hurston's third volume of folklore. Through Joyce Carol Thomas's carefully adapted text and Leonard Jenkins's arresting illustrations, the soulful, fanciful imaginations of ordinary folk will reach readers of all ages.

Leonard Jenkins received his B.F.A. from the American Academy of Art in Chicago. He is the illustrator of Sunflower Island by Carol Greene, which received a starred review in Publishers Weekly. Mr. Jenkins lives in New York City.

Joyce Carol Thomas is an internationally renowned author who received the National Book Award for her first novel, Marked By Fire, and a Coretta Scott King Honor for The Blacker the Berry and for her first picture book, Brown Honey in Broomwheat Tea. Her picture book I Have Heard of a Land received a Coretta Scott King Honor and an IRA/CBC Teachers' Choice Award and was an ALA Notable Book. Her other titles include The Gospel Cinderella, Crowning Glory, Gingerbread Days, and A Gathering of Flowers. Ms. Thomas lives in Berkeley, California.