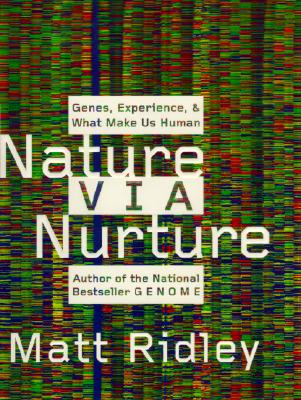 Genes, Experience, and What Makes Us Human

Following his highly praised and bestselling book Genome: The Autobiography of a Species in 23 Chapters, Matt Ridley has written a brilliant and profound book about the roots of human behavior. Nature via Nurture explores the complex and endlessly intriguing question of what makes us who we are.

In February 2001 it was announced that the human genome contains not 100,000 genes, as originally postulated, but only 30,000. This startling revision led some scientists to conclude that there are simply not enough human genes to account for all the different ways people behave: we must be made by nurture, not nature. Yet again biology was to be stretched on the Procrustean bed of the nature-nurture debate. Matt Ridley argues that the emerging truth is far more interesting than this myth. Nurture depends on genes, too, and genes need nurture. Genes not only predetermine the broad structure of the brain, they also absorb formative experiences, react to social cues, and even run memory. They are consequences as well as causes of the will.

Published fifty years after the discovery of the double helix of DNA, Nature via Nurture chronicles a revolution in our understanding of genes. Ridley recounts the hundred years' war between the partisans of nature and nurture to explain how this paradoxical creature, the human being, can be simultaneously free-willed and motivated by instinct and culture. Nature via Nurture is an enthralling,up-to-the-minute account of how genes build brains to absorb experience.


Praise For Nature Via Nurture: Genes, Experience, and What Makes Us Human…

“An engrossing study of what makes us who we are … conveyed with insight and style.”
— Publishers Weekly (starred review)

“Ridley is simply one of the best science writers in the business.”
— Hartford Courant