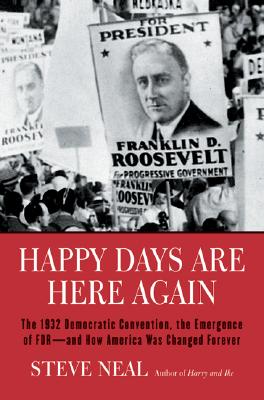 The 1932 Democratic Convention, the Emergence of FDR--And How America Was Changed Forever

Franklin Roosevelt was one of our greatest and most beloved presidents -- and yet he almost didn't get his party's nomination during his first run for the White House. Happy Days Are Here Again re-creates the crazy scheming, backroom plotting, and infighting of the 1932 Democratic convention -- a major historical event that took place over just a few days but determined the course of American politics for generations.

The extraordinary Chicago convention of 1932, rendered so vividly and dramatically by award-winning biographer Steve Neal, was one of the most suspenseful in our nation's history. Roosevelt may have entered the Chicago convention with the highest number of delegates, but the structure and rules of the nomination process prevented him from being a shoe-in. In fact, there were several viable contenders -- among them Al Smith, Newton D. Baker, John Nance Garner, and Albert C. Ritchie -- who also could have faced Herbert Hoover in the upcoming general election. With the Depression under way, it was not lost on those at this particular convention that they were not only selecting a nominee but also a president.

Among the dazzling and influential personalities Neal weaves into this high-stakes drama are Joseph P. Kennedy, William Randolph Hearst, Huey Long, Bernard Baruch, Will Rogers, Clarence Darrow, Amelia Earhart, Duke Ellington, and John Dos Passos. All of these players gathered during a Chicago summer to do battle over the leadership of their party and, consequently, the White House.

Happy Days Are Here Again calls on a wealth of primary sources and new information to provide a fresh perspective on this crucial moment in history, yet it is written with the exciting narrative pull of a novel. Ultimately, this is the untold story of the pivotal contest that remade the Democratic Party, marking the end of an era and the birth of modern America.