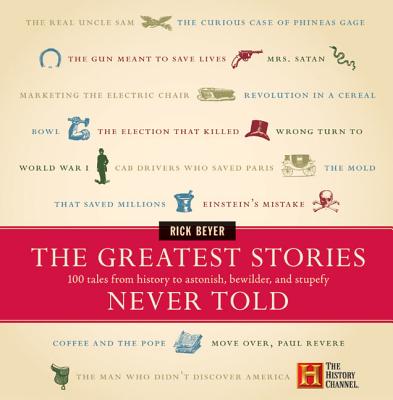 100 Tales from History to Astonish, Bewilder, and Stupefy

100 fascinating, unexpected, and startling stories you didn’t learn in history class, presented by The History Channel

History is filled with unpredictable people and unbelievable stories. Consider:

• The Pilgrims landed in Plymouth because they ran out of beer.

• Three cigars changed the course of the Civil War.

• The stethoscope was invented when a modest French doctor didn’t want to put his ear to the lavish bosom of a female patient.

• An Italian priest perfected the first practical fax machine in 1863.

• Teddy Roosevelt is the father of football’s forward pass.

• And believe it or not, actress Hedy Lamar not only appeared in the movies’ first nude scene, but later patented an idea that formed the basis for cell phone encryption. As Dave Barry would say, you can’t make this stuff up.

Inspired by the History Channel series Timelab 2000®, The Greatest Stories Never Told features the most startling stories ever plucked from the pages of history. The stories are accompanied by more than 400 illustrations gathered from libraries, archives and private collections the world over.


Praise For The Greatest Stories Never Told: 100 Tales from History to Astonish, Bewilder, and Stupefy…

“Full of tasty morsels…A delightful book to arm one for the next dull cocktail party.” — Chicago Tribune

“History like you’ve never read it before…Amusing.” — The Tennessean

Rick Beyer is the author of the popular Greatest Stories Never Told book series, and an award-winning documentary filmmaker whose work has been seen on The History Channel, A&E, and National Geographic Channel. He is also an accomplished speaker who inspires and entertains audiences around the country. He lives with his wife in Lexington, Massachusetts.