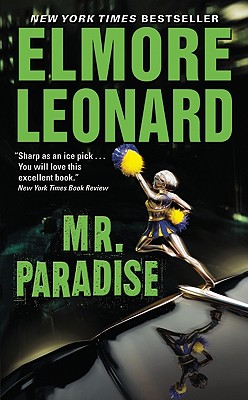 Elmore Leonard is the undisputed master, the “King Daddy of crime writers” (Seattle Times), in the august company of the all-time greats of mystery/noir/crime fiction genre: John D. MacDonald, Dashiell Hammett, James M. Cain, et al. The creator of such unforgettable classics as Stick, Out of Sight, and Get Shorty—not to mention the character of U.S. Marshal Raylan Givens, lately of TV’s hit series Justified—Leonard is in fine form with Mr. Paradise. A riveting Detroit-based thriller enlivened by Leonard’s trademark razor-sharp dialogue, Mr. Paradise follows a smart Victoria’s Secret model’s attempt to score big after surviving a double murder in a millionaire’s mansion…with a lonely cop acting as spoiler.

“The dialogue and the characters crackle ...MR. PARADISE is a perfect crime caper from a master.”
— Detroit Free Press

“Leonard returns to his Detroit roots for another unlikely romance amid the thorns of crime.”
— Kirkus Reviews

“Brilliantly constructed, wise and tough, this book ...offers a master class in how to write a novel.”
— Publishers Weekly (starred review)
or
Not Currently Available for Direct Purchase
Copyright © 2020 American Booksellers Association