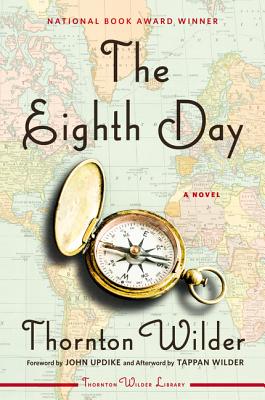 “[Wilder's] finest and most beautiful novel. . . . Spanning two continents and several generations, it begins as a murder mystery and goes on to tell a story, at once dramatic and philosophical, about the range of human courage, aspirations, steadfastness, weakness, defeat and victory.” — New York Post

This beautiful edition of Thornton Wilder’s renowned National Book Award–winning novel features a foreword by John Updike and an afterword by Tappan Wilder, who draws on unique sources as Wilder’s unpublished letters, handwritten annotations, and other illuminating documentary material.

At once a murder mystery and a philosophical tale, The Eighth Day is a “suspenseful and deeply moving” (New York Times) work of classic stature that has been hailed as a great American epic.

Set in a mining town in southern Illinois, the novels centers around two families blasted apart when the patriarch of one family, John Ashley, is accused of murdering his best friend. Ashley's miraculous jailbreak on the eve of his execution and his subsequent flight to South America trigger a powerful story tracing the fates of all those whose lives are forever changed by the tragedy: Ashley himself, his wife and children, and the wife and children of the victim.


Praise For The Eighth Day: A Novel…

“The profoundest, most versatile and most consistently experimental...American writer.” — Wall Street Journal

“Brilliant and daring...In a major work of the imagination, [Wilder] has raised the ultimate questions and sent them whirling their deep spirals with a wit and intelligence no other American novelist of the moment can match.” — Christian Science Monitor

“One of the country’s recognized master artists has produced his best and most absorbing novel.” — New York Times

“Wilder’s prose more than meets the challenge of his theme. It moves with superb smoothness and power. It combines the dramatic vigor and vividness of the playwright (Our Town, Skin of Our Teeth) with the best of prose writing. Many times it rises into majesty.” — Los Angeles Times

“Thornton Wilder has come up with his finest and most beautiful novel...a work of classic stature....Spacious, eloquent and moving, it assumes a kind of cosmic grandeur....Spanning two continents and several generations, it begins as a murder mystery and goes on to tell a story, at once dramatic and philosophical, about the range of human courage, aspirations, steadfastness, weakness, defeat and victory.” — New York Post