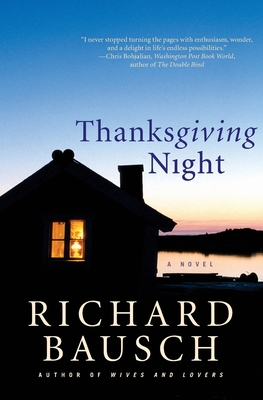 Will Butterfield can't believe it. His 75–year–old mother, Holly, is drunk and threatening to jump off the roof. Again.

Holly and Fiona, another elderly relative, won't stop tormenting Will and his wife Elizabeth with their bizarre (though often amusing) antics. Between Will's worries about his bookstore, The Heart's Ease, and Elizabeth's troublesome high school students, dealing with "the crazies" has become just too much.

But then something unexpected happens –– Henry Ward, a neighborhood handyman, meets the two old women, and he, his daughter Alison, and grandchildren are drawn into the Butterfields' lives in surprising ways. Both a comedy and a love story –– a first for Bausch –– Thanksgiving Night is about the real meaning of family, and one particular clan that has many reasons to be thankful.

Richard Bausch is the author of nine other novels and seven volumes of short stories. His work has appeared in the New Yorker, the Atlantic Monthly, Esquire, Playboy, GQ, Harper's Magazine, and other publications, and has been featured in numerous best-of collections, including the O. Henry Awards' Best American Short Stories and New Stories from the South. In 2004 he won the PEN/Malamud Award for Excellence in the Short Story.


Praise For Thanksgiving Night: A Novel…

“Bausch’s engagingly deranged characters hold our attention . . . in one of his more interesting and readable longer fictions.”
— Kirkus Reviews

“Beautifully told. ... Bausch supplies plenty to go around, just as one would wish on any Thanksgiving night. ”
— Milwaukee Journal Sentinel

“It’s a subtle, slyly accomplished feat, and Bausch brings his disparate storylines together in a powerfully moving finale.”
— Richmond Times-Dispatch

“Kooky relatives, drunken antics, and near-death experiences are fodder enough for three tomes. For this, we are thankful.”
— Entertainment Weekly