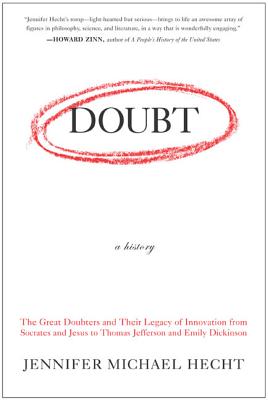 A History: The Great Doubters and Their Legacy of Innovation from Socrates and Jesus to Thomas Jefferson and Emily Dickinson

In the tradition of grand sweeping histories such as From Dawn To Decadence, The Structure of Scientific Revolutions, and A History of God, Hecht champions doubt and questioning as one of the great and noble, if unheralded, intellectual traditions that distinguish the Western mind especially-from Socrates to Galileo and Darwin to Wittgenstein and Hawking. This is an account of the world's greatest ‘intellectual virtuosos,' who are also humanity's greatest doubters and disbelievers, from the ancient Greek philosophers, Jesus, and the Eastern religions, to modern secular equivalents Marx, Freud and Darwin—and their attempts to reconcile the seeming meaninglessness of the universe with the human need for meaning,

This remarkable book ranges from the early Greeks, Hebrew figures such as Job and Ecclesiastes, Eastern critical wisdom, Roman stoicism, Jesus as a man of doubt, Gnosticism and Christian mystics, medieval Islamic, Jewish and Christian skeptics, secularism, the rise of science, modern and contemporary critical thinkers such as Schopenhauer, Darwin, Marx, Freud, Nietzsche, the existentialists.


Praise For Doubt: A History: The Great Doubters and Their Legacy of Innovation from Socrates and Jesus to Thomas Jefferson and Emily Dickinson…

“Hecht gleefully invites readers on a lively stroll through three millennia of clashes between believers and nonbelievers.”
— Detroit Free Press

“Hecht aims to give doubt its due in her lively and endlessly provocative new book.”
— Christian Century

“Hecht is right that doubt’s story deserves to be told ... [and] she tells it in just the right spirit.”
— Alan Wolfe, New Republic

Jennifer Michael Hecht is a philosopher, historian, and award-winning poet. She is the author of Doubt: A History and The End of the Soul; the latter won the Phi Beta Kappa Society's 2004 Ralph Waldo Emerson Award. Hecht's books of poetry include The Next Ancient World and Funny. She earned her Ph.D. in history from Columbia University and teaches at The New School in New York City.