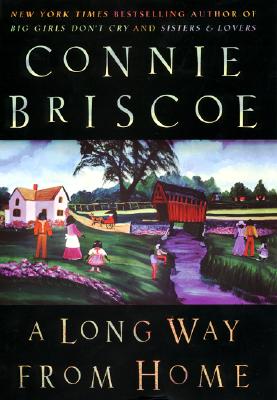 From Connie Briscoe, the New York Times bestselling author of Sisters & Lovers and Big Girls Don't Cry, comes a lyrical and moving tour de force that is her most daringly ambitious novel to date--a multigenerational story of slavery freedom, and the indestructible bonds of love and family witnessed through the lives of three unforgettable African-American women.

Shimmering with heartache and hope, A Long Way from Home recounts the joys, pain, and ultimate triumph of three generations: Susie; her daughter, Clara; and her granddaughter, Susan. Born and reared as house slaves on Montpelier, the Virginia plantation of President James Madison and his wife, Dolley Madison, they are united by love, by a fierce devotion to each other and their fellow slaves, and by a growing desire for freedom--a dream that will finally come to fruition for Susan at the end of the Civil War.

This hauntingly beautiful novel opens in the peaceful Piedmont area of Virginia. Trained as a house slave since childhood, Susie enjoys the privileges that her position as maid to Miss Dolley provides her and Clara. For Susie life holds no mystery, no promise beyond the boundaries of the plantation itself--a lesson she tries to impart to the dreamy Clara, who longs to control her own destiny despite her mother's frightening admonition: "You don't know a thing about freedom, 'cause I don't know anything about it. It takes money and know-how to live free. You don't just up and do it."

Life will change for both mother and daughter, though, with the death of James Madison and the departure of his wife for her town house, events that leave the estate in the hands of Dolley's profligate son, Todd. As a result of his neglectful stewardship, the plantation soon falls to a series of owners, each posing a new threat to Susie and Clara, and the other longtime Madison slaves with whom the two women have shared their entire lives.

Amidst these devastating changes, Clara grows into womanhood and becomes a mother herself, giving birth to two light-skinned daughters, Ellen and Susan. Yet the threat of separation that has shaped her life is soon a reality when her younger daughter, Susan, is sold to a wealthy businessman in Richmond. Susan must create a new life for herself in this bustling city, a life that will be filled with both terror and hope . And it is in Civil War-torn Richmond that she will find love and realize the long-held dream of her ancestors: freedom.

In A Long Way from Home, Connie Briscoe vividly recreates Southern life and the ambivalent, shifting relationships on both sides of the color divide, from the cruelty and insidious benevolence of white owners to the deep yearnings and complex emotions of the slaves themselves. This poignant, powerful story pays homage to the African-American experience and to the ancestors, both black and white, whose lives and histories are indelibly entwined with our own.

Connie Briscoe lives in Falls Church, Virginia. She is a descendant of the slaves on the Madison family plantation.
or
Not Currently Available for Direct Purchase
Copyright © 2020 American Booksellers Association