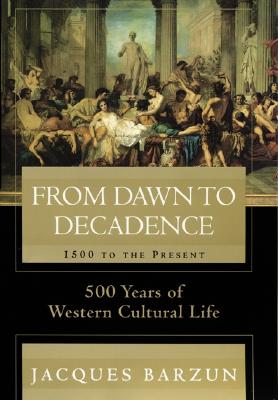 From Dawn to Decadence

500 Years of Western Cultural Life 1500 to the Present

Highly regarded here and abroad for some thirty works of cultural history and criticism, master historian Jacques Barzun has set down in one continuous narrative the sum of his discoveries and conclusions about the whole of Western culture since 1500.

Barzun describes what Western Man wrought from the Renaissance and Reformation down to the present in the double light of its own time and our pressing concerns. He introduces characters and incidents with his unusual literary style and grace, bringing to the fore those that have been forgotten or obscured. His compelling chapters—such as "Puritans as Democrats," "The Monarchs' Revolution," and "The Artist Prophet and Jester"—show the recurrent role of great themes throughout the era.

The triumphs and defeats of five hundred years form an inspiring saga that modifies the current impression of one long tale of oppression by white European males. Women and their deeds are prominent, and freedom (even in sexual matters) is not an invention of the last decades. And when Barzun rates the present not as a culmination but a decline, he is in no way a prophet of doom. Instead, he shows decadence as the normal close of great periods and a necessary condition of the creative novelty that will burst forth—tomorrow or the next day.

Only after a lifetime of separate studies covering a broad territory could a writer create with such ease the synthesis displayed in this magnificent volume.


Praise For From Dawn to Decadence: 500 Years of Western Cultural Life 1500 to the Present…

“How many times in one’s life does one get to welcome a masterpiece, which, without a doubt, this amazing work certainly is?”
— National Review

“Jacques Barzun’s summa is the work of a very great historian and of a seer. The phrase from the Bible is apposite: ‘The hearing ear, and the seeing eye’ is his great gift--and a gift to his readers.”
— John Lukacs, author of Five Days in London

Born in France in 1907, Jacques Barzun came to the United States in 1920. After graduating from Columbia College, he joined the faculty of the university, becoming Seth Low Professor of History and, for a decade, Dean of Faculties and Provost. The author of some thirty books, including the New York Times bestseller From Dawn to Decadence, he received the Gold Medal for Criticism from the American Academy of Arts and Letters, of which he was twice president. He lived in San Antonio, Texas, before passing away at age 104.