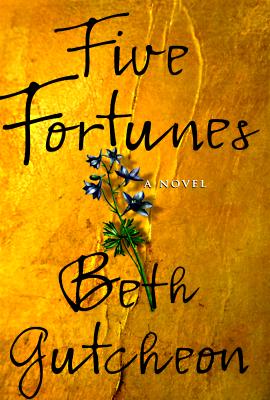 "She has absolutely perfect pitch when it comes to capturing the voices of these remarkable women. This seems to me to be the quintessential American woman's tale. I loved it."

Five Fortunes, the funny and hope-filled new novel from acclaimed author Beth Gutcheon, is about a year in the life of five remarkable women, each of whom saves her own life by trying to do the right thing for somebody else.

Rae Strouse is a lively octogenarian with an ailing husband. Carter Bond is a private investigator trying to give up smoking. Amy and Jill Burrows are a mother and teenage daughter traveling together, bearing a secret weight of baggage between them. Laura Lopez, reeling from the death of her politician husband, needs a new set of dreams. They are about to meet at a fabled health spa called The Cloisters, known affectionately to its devotees as Fat Chance.

Gutcheon weaves a large-hearted tale of five vivid and memorable women who know where they've been but have no idea where they're going. In the luxury boot-camp atmosphere of The Cloisters, where doctors, lawyers, spoiled housewives, movie stars and captains of industry are stripped of makeup and jewelry and the other social markers that keep people from really seeing each other, surprising friendships can be made, with surprising consequences.

In this year of their lives, these five women learn that it is both true and untrue that we make our own luck. Though the worlds they inhabit are as real as tomorrow's newspaper stories, constantly reminding them how closely linked are rich and poor, fortune and misfortune, there is also a magic to the tale that causes it to resonate long after the book is finished. Beth Gutcheon is the critically acclaimed author of four novels, The New Girls, Still Missing, Domestic Pleasures and Saying Grace. She is the writer of several film scripts, including the Academy Award nominee The Children of Theatre Street. She lives in New York City.