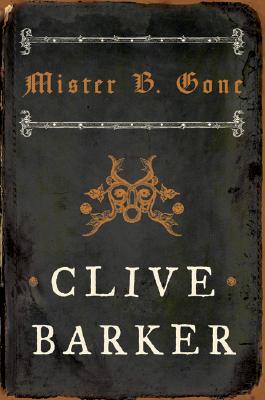 Mister B. Gone marks the long-awaited return of Clive Barker, the great master of the macabre, to the classic horror story. This bone-chilling novel, in which a medieval devil speaks directly to his reader—his tone murderous one moment, seductive the next—is a never-before-published memoir allegedly penned in the year 1438. The demon has embedded himself in the very words of this tale of terror, turning the book itself into a dangerous object, laced with menace only too ready to break free and exert its power.

A brilliant and truly unsettling tour de force of the supernatural, Mister B. Gone escorts the reader on an intimate and revelatory journey to uncover the shocking truth of the battle between Good and Evil.


Praise For Mister B. Gone…

“Mr. Barker is much more than a genre writer, and his extravagantly unconventional inventions are ingenious refractions of our common quest to experience and understand the mysterious world around us and the mysteries within ourselves.”
— New York Times Book Review

“A swift, spare novel that reminds us, once again, of the discipline and focus Barker can bring to shorter forms. . . . A subtle, surprising book. . . . Barker, who rarely does anything predictable, confounds expectations once again, giving us one of the most resonant, provocative novels of his career.”
— Washington Post

“It’s about time for something nastier from the man Stephen King once called ‘the future of horror literature.’ . . . Filled with tongue-in-cheek depravity. . . . If you know what you’re getting into, Mister B. Gone is great fun.”
— Rocky Mountain News

“A clever book. . . . Succeeds admirably. Because Barker remembers that everyone loves a measure of fright in their stories.”
— Globe and Mail (Toronto)