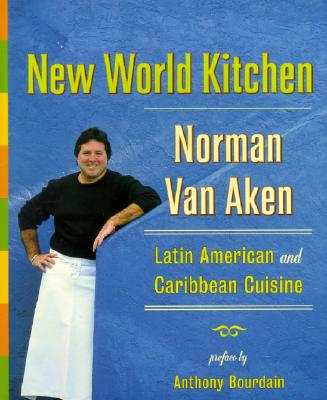 In New World Kitchen, Norman Van Aken explores the rich influence of Latin American cuisine on the American palate. From the African-influenced Creole cuisines of Cuba, Puerto Rico, and Jamaica to South American flavors from Brazil, Peru, and Argentina to the distinct tastes of Mexico, Van Aken works his particular magic on this luscious cornucopia and emerges with a wealth of brilliant recipes, such as the exquisite Masa-Crusted Chicken with Piquillo Peppers, Avocado Butter, and Greens in Grapefruit-Honey Vinaigrette.

Well known in the culinary world for his passion and genius, Norman Van Aken has earned a reputation for innovation and artistry. Armed with his signature recipes, employing a cast of rich ingredients in inventive combinations, anyone can masterfully harness the fire-and flare of Latin American cuisine. With a preface by Anthony Bourdain, author of the bestselling Kitchen Confidential, and enticing color photo graphs by Tim Turner, winner of the James Beard Foundation's award for food photography, New World Kitchen is a lush, beautiful book that new worlds of flavor.