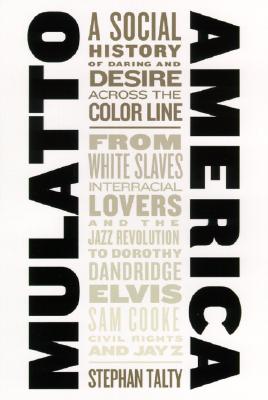 At the Crossroads of Black and White Culture: A Social History

Black and white culture has been blending and colliding in America for hundreds of years. In the 1700s, black slaves discovered their masters' Bibles and found in them a seditious faith of their own. In the 1920s, young white men fell in love with New Orleans jazz and created an underground of cultural dissidents. In the 1970s, black style began its takeover of the sports world and made Dr. J and Michael Jordan the idols of millions.

In "Mulatto America, a dazzling work of cultural history, the stories of these daring and deeply influential encounters are described in vibrant detail.

Beginning with new and shocking revelations about the white slaves kidnapped into "the House of Bondage," Mulatto America vividly chronicles the hidden connections that have shaped American style and character. Stephan Talty proposes that, along with the hatred that ruled the relationship between blacks and whites for so long, there has been a largely unexamined flip side: a powerful attraction that led both races to mimic what they saw and desired in each other.

The pages of this groundbreaking work, which introduces a strong new voice, are populated by the renegades who crossed the color line out of deep conviction or wild curiosity: W. E. B. Du Bois, Dorothy Dandridge, Elvis, Jay-Z, and many others.

Each chapter examines a different vanguard: The interracial lovers of the slavery era who ignored theories of racial inferiority and gave us models of devotion and daring. The black elite early in the last century who found in Shakespeare and Michelangelo not only deeply humanist masterpieces but hope that white bigotry could be overcome. And the members of today's hip-hop generation, who revel inthe cultural freedom earned at so high a cost.

Drawing on original research and daring new interpretations of crucial events in American history, Talty paints a portrait of a lost America: one in which musicians, writers, and ordinary people led the nation to a deeper understanding of the strangers on the other side of town.

Without the mixing of black and white culture, America would look, sound, and feel completely different than it does today. On a cultural level, as well as racially, we are indeed a mulatto nation. This provocative and highly engaging new history shows us how this came to pass.