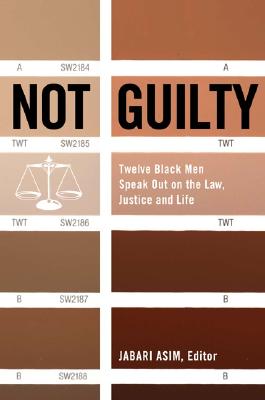 Twelve Black Men Speak Out on Law, Justice, and Life

Not Guilty is an anthology of twelve original essays by some of America's most influential young black male writers and critics dealing with how they see this country and how this country sees them. American society, past and present, has a contentious relationship with black men. The greatest evidence of this hostility is the use of racial profiling by law enforcement. Incidents involving Amadou Diallo, Patrick Dorismond, Rodney King, Abner Louima, and the New Jersey State Police all highlight this problem. With the Diallo case as a springboard for exploration, essays range from discussions on encounters with police to hesitating to purchase a luxury car for fear of police suspicion to historical examinations of race relations in the United States. The contributors -- poets, journalists, lawyers, writers, and professors -- are as varied as the contents of their essays. Each presents an honest, personal, and erudite examination on life as a black man in America.

Jabari Asim is the author of the critically acclaimed The N Word. He is editor-in-chief of The Crisis—the magazine of the NAACP—and former editor at and frequent contributor to the Washington Post, and his writing has appeared on Salon.com and in Essence, the Los Angeles Times, and other publications. He divides his time between Maryland and Illinois with his wife and five children.