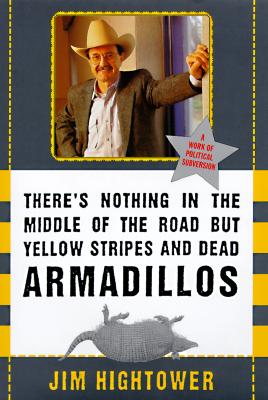 A Work of Political Subversion

Hightower is at it again, this time taking aim at those bedrock institutions that drive the economic and cultural life of the country. As the man himself says, "I am an agitator, and an agitator is the center post in a washing machine that gets the dirt out." In this lucid, viciously funny, downright refreshing book, Hightower argues that government, the media and corporate conglomerates have put us smack-dab in the middle of the mess we're in today.

Leaving almost no contemporary issue unscathed, he lays bare the dirty politics behind the new global economy, exposing how these three institutions have undermined basic American values like justice, fairness, tolerance and opportunity; how they've steamrolled the common people, ignoring their needs; how they've created an oppressive and oppressing machine that keeps the downtrodden downtrodden.

Author, radio commentator, public speaker and political sparkplug, Hightower doesn't gripe and whine, he offers commonsense solutions to controversial issues. In language everyone can understand, he tackles big issues and proposes strategies that are easy to implement. Calling on the poor and middleclass, the groups he claims represent a true populist majority, he shows how an already strong grassroots movement can be made even stronger. Arguing for change on the local level, Hightower demonstrates exactly how this can be accomplished.

Jim Hightower is a political spark plug who has spent 25 years battling Washington and Wall Street on behalf of working families, consumers, environmentalists, small businesses and just plain folk. He confesses that he has been a practicing politician, serving two terms as Texas' elected agriculture commisioner. In addition to his popular radio broadcasts, his speechifying and all-around agitating, he publishes the biweekly political newsletter The Hightower Lowdown. His previous bestseller was There's Nothing in the Middle of the Road but Yellow Stripes and Dead Armadillos.
Loading...
or
Not Currently Available for Direct Purchase