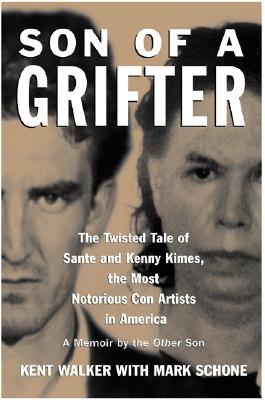 Son of a Grifter

The Twisted Tale of Sante and Kenny Kimes, the Most Notorious Con Artists in America: A Memoir by the Other Son

In 1998 a troubled young man and his flamboyant mother were arrested for murdering a wealthy widow in her New York City mansion. Suddenly, America was transfixed by a pair of real-life film noir characters, an Oedipal team of scam artists who left a trail of blood, lies, and larceny from coast to coast. The media couldn't get enough of the twisted relationship between Sante Kimes and her twenty-three-year-old son Kenny.

But the most chilling story of all was never told -- until now. Kent Walker, Sante's elder son, reveals how he survived forty years of "the Dragon Lady's" very special brand of motherly love and still managed to get away.

As a child Kent watched his mother destroy his hardworking father, Ed Walker, and then -- with Kent's painful collusion -- snare what Sante called "my millionaire." When she married seemingly respectable real-estate developer Ken Kimes, it was a match made in hell.

For the next two decades Kent's mother and stepfather indulged in a globetrotting orgy of criminal behavior, laying waste to each other and anyone who got in the way. Kent, their would-be recruit, was privvy to the family business -- torching houses, defrauding friends, crashing White House parties, "shopping" for trunkloads of fur coats -- and Sante's self-serving style of adultery. When Kent's half-brother, Kenny was born, Kent was twelve years old -- old enough to know that he was his younger sibling's only protector. Kent tried desperately to save Kenny from his mother's sinister bidding. His failure haunts him to this day.

Here, with shocking and sometimes brutal frankness, Kent explodes the romantic Hollywood image of the grifter as antihero and exposes the truth about Sante Kimes behind the headlines. Sone of a Grifter poignantly chronicles what it means to love somebody despite your better instincts, your worst fears, and even your most forbidden hopes.


Praise For Son of a Grifter: The Twisted Tale of Sante and Kenny Kimes, the Most Notorious Con Artists in America: A Memoir by the Other Son…

“One of the most engrossing true-crime accounts to be published in recent memory.”
— Booklist

“Well-researched and touching...A a chronicle of Sante Kime’s life, it’s unlikely to be surpassed by any other.”
— Publishers Weekly

“Enthralling...A mesmerizing account of growing up as the child of a world-class sociopath.”
— David Plotz, New York Times

Kent Walker lives in California with his wife and children.