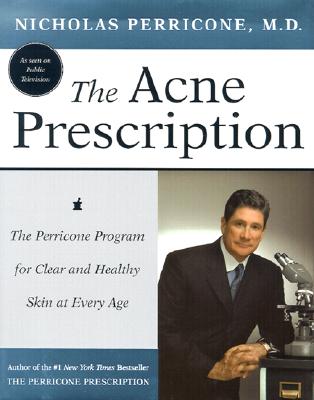 The Perricone Program for Clear and Healthy Skin at Every Age

From the #1 New York Times best–selling author of The Perricone Prescription.

The Acne Prescription delivers a complete program that incorporates Dr. Perricone's trademark three–tiered approach (anti–inflammatory diet, targeted acne–fighting nutritional supplements, and breakthrough topical applications) that will help you clear your skin in a matter of days. Not only will you see impossible–to–ignore improvement in your skin, the program will help improve your body's overall health and appearance. And, Dr. Perricone will tell you what to do to treat the pitting and scarring that often affects adult acne sufferers.

The Acne Prescription features dramatic before–and–after photos, rock–solid scientific background explications, and a day–by–day program of meals and exercises. And, Dr Perricone will dispel common medical myths regarding the causes and treatment of acne. By following the Perricone Program of diet, vitamins, topical applications, and exercise, you can dramatically reduce the appearance of blemishes and breakouts, and achieve a smoother look within three days You will look and feel better than you ever thought possible. Good health and beautiful skin – an unbeatable combination.

Nicholas Perricone, MD, FACN, is a board certified clinical and research dermatologist. A brilliant scholar, Dr. Perricone completed medical school in just 2 1/2 years, graduating at the head of his class. He completed his internship in Pediatrics at Yale Medical School and his Dermatology Residency at Ford Medical Center. Dr. Perricone is regarded as the father of the Inflammation Theory of Aging. He is the author of the New York Times bestseller The Wrinkle Cure (Rodale Reach May 2000). Warner Books published the trade paper edition in May of 2001. It reached # 1 on both the New York Times and the Los Angeles Times bestseller lists March 24, 2002 and remained there for four weeks. Close to one million copies are in print. His PBS-TV special of the same name is one of the top fundraisers for Public Television.

Prior recipients include National Medal of Science recipient, Igor Sikorsky, (founder of Sikorsky aircraft) inventor of the first practical helicopter, which established the bedrock upon which today's helicopter industry rests, and Buckminster Fuller, inventor of the geodesic dome -- the lightest, strongest, and most cost-effective structure ever devised.

Dr. Perricone holds dozens of US and international patents for the treatment of skin and systemic disease, and for the use of topical anti-inflammatories for reversing and preventing damage to skin caused by age, the sun, the environment, hormonal changes, etc. He is the author of numerous scientific articles documenting the results of his research and is a contributing editor to the peer-reviewed medical journal Skin and Aging and is a member of the editorial board of Archives of Gerontology & Geriatrics. He is Chairman of the International Symposium on Aging Skin, an annual meeting in which researchers come together from around the world to share their latest scientific breakthroughs in the prevention of aging and aging skin.

Vogue magazine has named Dr. Perricone one of the top four dermatologists in the United States.

His latest book The Perricone Prescription, A Physicianâ€™s 28-Day Program for Total Body and Face Rejuvenation, is being published by HarperCollins to coincide with the premier of his second television special for PBS-TV, the leading national educational television network, in September of 2002.