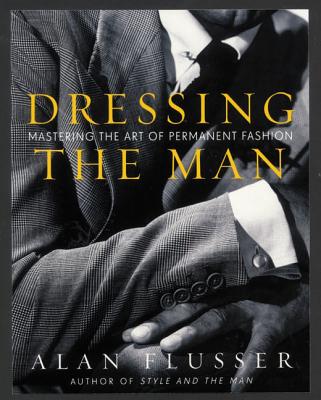 Mastering the Art of Permanent Fashion

Dressing the Man is the definitive guide to what men need to know in order to dress well and look stylish without becoming fashion victims.

Alan Flusser's name is synonymous with taste and style. With his new book, he combines his encyclopedic knowledge of men's clothes with his signature wit and elegance to address the fundamental paradox of modern men's fashion: Why, after men today have spent more money on clothes than in any other period of history, are there fewer well-dressed men than at any time ever before?

According to Flusser, dressing well is not all that difficult, the real challenge lies in being able to acquire the right personalized instruction. Dressing well pivots on two pillars -- proportion and color. Flusser believes that "Permanent Fashionability," both his promise and goal for the reader, starts by being accountable to a personal set of physical trademarks and not to any kind of random, seasonally served-up collection of fashion flashes.

Unlike fashion, which is obliged to change each season, the face's shape, the neck's height, the shoulder's width, the arm's length, the torso's structure, and the foot's size remain fairly constant over time. Once a man learns how to adapt the fundamentals of permanent fashion to his physique and complexion, he's halfway home.

Taking the reader through each major clothing classification step-by-step, this user-friendly guide helps you apply your own specifics to a series of dressing options, from business casual and formalwear to pattern-on-pattern coordination, or how to choose the most flattering clothing silhouette for your body type and shirt collar for your face.

A man's physical traits represent his individual road map, and the quickest route toward forging an enduring style of dress is through exposure to the legendary practitioners of this rare masculine art. Flusser has assembled the largest andmost diverse collection of stylishly mantled men ever found in one book. Many never-before-seen vintage photographs from the era of Cary Grant, Tyrone Power, and Fred Astaire are employed to help illustrate the range and diversity of authentic men's fashion. Dressing the Man's sheer magnitude of options will enable the reader to expand both the grammar and verbiage of his permanent-fashion vocabulary.

For those men hoping to find sartorial fulfillment somewhere down the road, tethering their journey to the mind-set of permanent fashion will deliver them earlier rather than later in life.


Praise For Dressing the Man: Mastering the Art of Permanent Fashion…

“A Hoyle’s, a Fowler’s, a Webster’s, a Baedeker’s, a Machiavelli’s, a von Clausewitz’s guide to men’s dress.”
— Tom Wolfe

“If it’s male elegance and sophistication you aspire to, DRESSING THE MAN will suit you perfectly.”
— Art Cooper, Editor in Chief, GQ

Alan Flusser is the author of a number of books about men's style, including Dressing the Man. He is the president of Alan Flusser Designs, a company he founded in 1979. He attracted national attention in 1987 for Michael Douglas's wardrobe in Wall Street, as well as later acclaim for his work on the HBO movie Barbarians at the Gate, the Al Pacino movie Scent of a Woman, and American Psycho starring Christian Bale. In 1988, he was placed as a permanent member on the International Best-Dressed List.