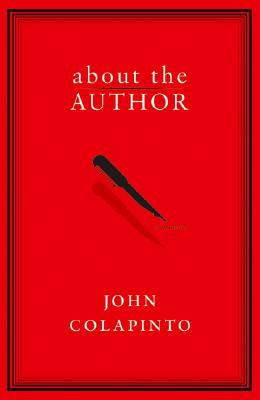 Cal Cunninghman has always fantasized about being a novelist. But at twenty-five, he's far from realizing his dream. Newly arrived in Manhattan, he toils as a bookstore stockboy, lives in a dire neighborhood, and never seems to write anything. How curious, then, that Cal should shortly publish a rollicking autobiographical novel that shoots to the top of bestseller lists and sells to the movies for a million dollars.

Reminiscent of Patricia Highsmith's gripping "Ripley" novels, About the Author is a wickedly funny psychological thriller that not only casts a knowing eye on the excesses of the current Manhattan publishing world, but touches on deeper themes of literary envy, identity, guilt, and the fatal difference between reality and imagination.

John Colapinto has written for Vanity Fair, The New Yorker, Esquire, Mademoiselle, Us Weekly, and Rolling Stone, where the landmark National Magazine Award-winning article that was the basis for As Nature Made Him first appeared. He is also the author of the novel About the Author. He lives in New York City with his wife and son.