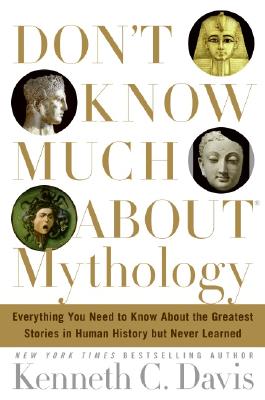 Don't Know Much About Mythology (Hardcover)

It has been fifteen years since Kenneth C. Davis first dazzled audiences with his instant classic Don't Know Much About® History, vividly bringing the past to life and proving that Americans don't hate history, they just hate the dull, textbook version they were fed in school. With humor, wit, and a knack for storytelling, Davis has been bringing readers of all ages up to speed on history, geography, and science ever since. Now, in the classic traditions of Edith Hamilton and Joseph Campbell, he turns his talents to the world of myth.

Where do we come from? Why do stars shine and the seasons change? What is evil? Since the beginning of time, people have answered such questions by crafting imaginative stories that have served as religion, science, philosophy, and popular literature. In his irreverent and popular question-and-answer style, Davis introduces and explains the great myths of the world, as well as the works of literature that have made them famous. In a single volume, he tackles Mesopotamia's Gilgamesh, the first hero in world mythology; Achilles and the Trojan War; Stonehenge and the Druids; Thor, the Nordic god of thunder; Chinese oracle bones; the use of peyote in ancient Native American rites; and the dramatic life and times of the man who would be Buddha.

Ever familiar and instructive, Davis shows why the ancient tales of gods and heroes -- from Mount Olympus to Machu Picchu, from ancient Rome to the icy land of the Norse -- continue to speak to us today, in our movies, art, language, and music. For mythology novices and buffs alike, and for anyone who loves a good story, Don't Know Much About® Mythology is a lively and insightful look into the greatest stories ever told.

Kenneth C. Davis is the New York Times bestselling author of A Nation Rising; America's Hidden History; and Don't Know Much About® History, which spent thirty-five consecutive weeks on the New York Times bestseller list, sold more than 1.7 million copies, and gave rise to his phenomenal Don't Know Much About® series for adults and children. A resident of New York City and Dorset, Vermont, Davis frequently appears on national television and radio and has been a commentator on NPR's All Things Considered. He blogs regularly at www.dontknowmuch.com.

“...ranges widely and with such sparkling wit...a superb starting point for entering the world of mythology.”
— Publishers Weekly (starred review)

“Davis is clearly the owner of a questing mind....An accessible and informed guide to an always-fascinating subject.”
— Kirkus Reviews

“A massive overview of every myth under the sun. Davis shatters commonly held myths about myths.”
— Daily News
or
Not Currently Available for Direct Purchase
Copyright © 2020 American Booksellers Association