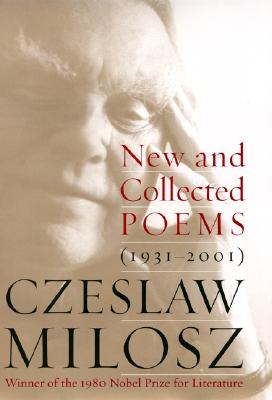 New and Collected Poems: 1931-2001 celebrates the exceptional career of Czeslaw Milosz, from his first work, written when he was twenty, to his newest poems, published for the first time in English in this volume.

Widely regarded as one of the greatest poets of our time, Czeslaw Milosz is a master of probing inquiry and graceful expression. From his early poems, in which he declares, "I, a faithful son of the black earth, shall return to the black earth" ("Hymn"), to his newest work, in which he sees himself as a lofty, gray-headed spirit "Saved by his amazement, eternal and divine" ("For My Eighty-eighth Birthday"), Milosz's poetry is infused with a tireless spirit and penetrating insight into fundamental human dilemmas. In "Report," he arrives at the staggering yet simple truth that "to exist on the earth is beyond any power to name." in "Craftsman," he looks back over a life that was difficult to lead, but in the end he is nonetheless "Praising, renewing, healing. Grateful because the sun rose for you and will rise for others."

"With its clarity, historical awareness and moral vision," writes Don Began in The Nation, Milosz's work proves that "poetry can define and address the concerns of an age." Milosz himself describes poetry as "the passionate pursuit of the Real," "a witness and participant in one of mankind's major transformations." A defector to France in 1951 after having lived under Communism and National Socialism in Eastern Europe, he brings to bear the political awareness of an exile -- most notably in A Treatise on Poetry, a sixty-page exploration of the world wars that rocked the first half of the twentieth century. His newer poems, such as "Sarajevo," "Zdziechowski," and "On the Inequality of Men," also reflect the sharp political focus through which he continues to bear witness to the events that stir the world.

Unflinching, outspoken, and unsentimental, Milosz digs among the rubble of the past, choosing from the bad as well as the good, forging a vision that encompasses pain as well as joy. His work is "one of the monumental splendors of poetry in our age" (Edward Hirsch, The New York Times Book Review). New and Collected Poems: 1931-2001 is an essential collection from one of the most important voices in contemporary poetry.

Czeslaw Milosz was born in Szetejnie, Lithuania, in 1911. He worked with the Polish resistance movement in Warsaw during World War II and was later stationed in Paris and Washington, D.C., as a Polish cultural attaché. He defected to France in 1951, and in 1960 he accepted a position at the University of California, Berkeley. He was awarded the Nobel Prize in Literature in 1980, and was a member of the American Academy and Institute of Arts and Letters. He died in 2004.