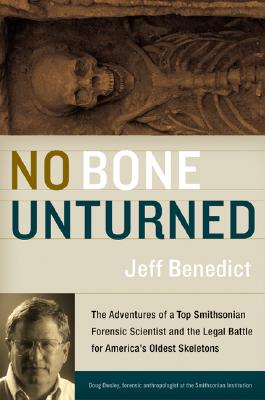 “A fast and exciting read. . . . This survey of Owsley’s career will appeal to both science and legal buffs.” --Publishers Weekly

The story of the Smithsonian’s brilliant forensic anthropologist and the 9,000-year-old skeleton that sparked his landmark lawsuit against the U.S. government

When he is not studying ancient skeletons, Doug Owsley is enlisted by the State Department and the FBI to identify remains. He has worked on some of the most notorious tragedies in recent history—Bosnia, Waco, 9/11 and Jeffrey Dahmer’s victims among them. When an anthropologist in Kennewick, WA, calls Owsley to help study a 9,000 year-old caucasoid skeleton, he gets caught up in a battle against the Justice Department and Indian tribes who claim the skeleton is Native American and should be buried and not analyzed.

Owsley, backed by scientists worldwide, files suit against the government and is now at the forefront of a landmark case—currently pending a ruling in the U.S. District Court—that may alter repatriation laws and have a significant impact on the classic views of Native Americans, migration patterns, and anthropology, as well as our understanding of prehistory.


Praise For No Bone Unturned: The Adventures of a Top Smithsonian Forensic Scientist and the Legal Battle for America's Oldest Skeletons…

“Benedict argues that Foxwoods is the product of clever lawyering, abetted by asleep-at-the-switch politicians. It’s owners, the Mashantucket Pequotes, are not Pequot Indians—in fact, probably not Indians at all.”
— San Francisco Examiner

“Doug Owsley is in a league of his own. He dares to go where no scientist would go. Compulsively curious, relentless in his search for truth, and armed with a mind that works frighteningly fast, he is uncovering the deepest mysteries contained in America’s skeletons and revolutionizing our view of the past. No Bone Unturned is a riveting story of Owsley’s life and provides an intriguing look at the world of forensic science.”
— Bill Bass, founder of the Body Farm

“An enthusiastic profile…Benedict follows Owsley as he performs his fascinating, if at times grisly, labors examining the remains…the controversy does highlight the difficult choices to be made between scientific understanding and the rights of Native Americans.…Benedict does a good job walking readers through Owsley’s work, explaining how he reached various conclusions given the evidence.”
— Kirkus Reviews

“Two books in one…a fast and exciting read…This survey of Owsley’s career will appeal to both science and legal buffs.”
— Publishers Weekly

“This work updates its predecessors… A sympatheic profile of Owsley and his career...Benedict’s book will appeal to those interested in the field of forensic anthropology.”
— Booklist

“What interest would the White House have in a 9,800-year-old skeleton? Enough, it turns out, to come close to closing the door on the archaeological study of ancient bones uncovered in this country.…[NO BONE UNTURNED] is a fascinating account of the career of one of the world’s leading forensic anthropologists and how he goes about his business.”
— Kansas City Star

“That bad boy of Indian Country, Jeff Benedict, is back at it again.…An appealing tale of an archaeologist and a nearly 10,000-year-old skeleton. ...Put this one on your beach-reading list. …[Benedict]’s at his best telling about the work of this unusual man, who solves mysteries by looking at bones... Benedict skillfully takes the reader into the world of the bone detective.”
— Hartford Courant

“[NO BONE UNTURNED] stands apart from its predecessors not only because it offers the most up-to-date narrative of events, but also because it tells the story through the eyes of the brilliant Smithsonian forensic anthropologist who stood at the center of the storm, Doug Owsley. …Should be of particular interest of fans of mystery writers like Patricia Cornwell and TV shows like CSI. …Benedict does an excellent job of chronicling the federal government’s confounding behavior throughout the litigation. …A page-turner... Benedict poignantly details the impact of the verdict on all parties, most notably the Smithsonian Man who risked his job and his reputation in the name of science.”
— Chicago Tribune

“Jeff Benedict paints an intriguing portrait of Owsley… What Owsley lives for is studying much older remains that have much to tell him that he can pass on to mankind. …[Benedict] also depicts this Sherlock of science on the job and excites us an we see him unravel old mysteries interred in crypts, graves, and archaeological sites. …While showing us Owsley in action, Benedict lets us accompany him on some fascinating cases. …Owsley’s work...changed history.”
— The Journal Inquirer

“Compelling… [Owsley]…risked his job and his reputation in the name of science.”
— Chicago Tribune

“Appealing…Beneduct skillfully takes the reader into the world of the bone detective.”
— Hartford Courant

Jeff Benedict conducted the first national study on sexual assault and athletes. He has published three books on athletes and crime, including a blistering exposé on the NFL, Pros and Cons: The Criminals Who Play in the NFL, and Public Heroes, Private Felons: Athletes and Crimes Against Women. He is a lawyer and an investigative journalist who has written five books.