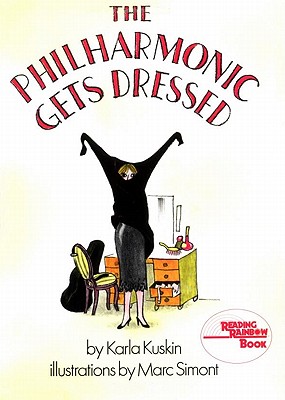 The Philharmonic Gets Dressed

"It is almost Friday night. Outside, the dark is getting darker," and here and there around the city ninety-two men and thirteen women are getting dressed to go to work. First they bathe and put on their underwear. Then they don special black-and-white apparel. Then when the one hundred and five people are completely ready, each takes a musical instrument and travels to midtown. There, at 8:30 tonight, they will work together: playing.

In these pages Karla Kuskin and Marc Simont combine their talents to give us a delightful and unusual inside view of one way an orchestra prepares.

Karla Kuskin wrote more than fifty books for children, including the Philharmonic Gets Dressed, Green as a Bean, and Moon, Have You Met My Mother She was the winner of the NCTE Award for Excellence in Poetry, among other honors. And once, long ago, may have given her son a woolly red hat.