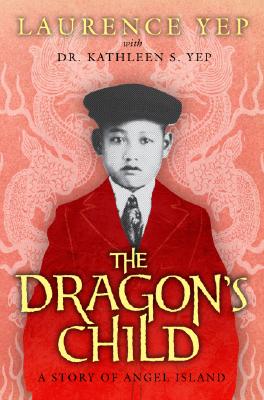 A Story of Angel Island

Did you want to go to America?
Pop: Sure. I didn't have a choice. My father said I had to go. So I went.

Were you sad when you left your village?
Pop: Maybe a little . . . well, maybe a lot.

Ten-year-old Gim Lew Yep knows that he must leave his home in China and travel to America with the father who is a stranger to him. Gim Lew doesn't want to leave behind everything that he's ever known. But he is even more scared of disappointing his father. He uses his left hand, rather than the "correct" right hand; he stutters; and most of all, he worries about not passing the strict immigration test administered at Angel Island.

The Dragon's Child is a touching portrait of a father and son and their unforgettable journey from China to the land of the Golden Mountain. It is based on actual conversations between two-time Newbery Honor author Laurence Yep and his father and on research on his family's immigration history by his niece, Dr. Kathleen S. Yep.

Dr. Kathleen S. Yep is an assistant professor of Asian American studies and sociology at Pitzer College, which is a member of the Claremont Colleges in Southern California. She received her B.A., M.A., and Ph.D. at the University of California, Berkeley. This is her first book for children. She lives in San Gabriel, California.