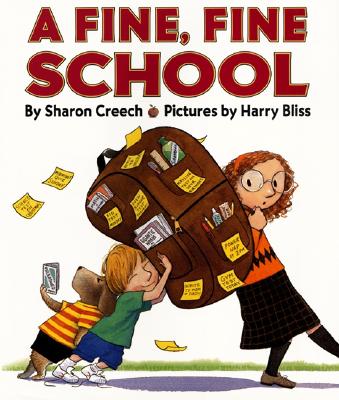 A Fine, Fine School is a delight for kids, with its colorful illustrations and gentle comeuppance for a well-meaning principal who learns that learning outside of school can be just as important as being in school.

Tillie goes to a fine, fine school where kids learn about dinosaurs, build pyramids, and paint portraits. When her principal decides to call all the students and teachers together for an announcement, no one could have predicted he would say that there will be school on Saturdays! Soon everyone goes to school on Sundays, holidays, and even the summer. He loves school so much that he forgets to give anyone time off!

This funny picture book from Newbery Medal winner Sharon Creech, author of Walk Two Moons, and New Yorker cartoonist Harry Bliss is perfect for classroom sharing and for kids who enjoy school but want everyone to remember that time off is important too!

New York Times bestselling artist Harry Bliss is a cartoonist and cover artist for the New Yorker magazine. He is the author and illustrator of Bailey and Luke on the Loose and the illustrator of A Fine, Fine School by Sharon Creech, Which Would You Rather Be? by William Steig, Diary of a Worm by Doreen Cronin, and Louise, The Adventures of a Chicken by Kate DiCamillo. His self-titled single panel gag cartoon Bliss appears in newspapers internationally. He lives in New Hampshire. You can visit him online at www.harrybliss.com.


Praise For A Fine, Fine School…

“This book has it all.”
— ALA Booklist (starred review)