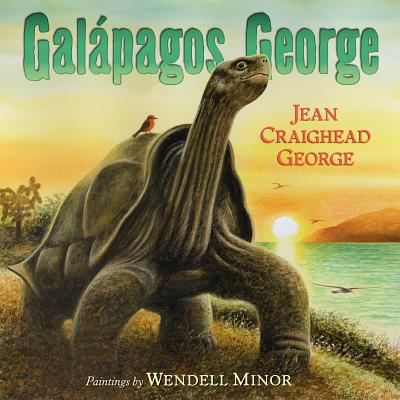 This is the story of the famous Lonesome George, a giant tortoise who was the last of his species, lived to be one hundred years old, and became known as the rarest creature in the world. His story gives us a glimpse of the amazing creatures inhabiting the ever-fascinating Galápagos Islands.

Renowned naturalist and bestselling author of the Newbery Medal-winning Julie of the Wolves and the critically acclaimed Everglades Jean Craighead George once again introduces children to the wonders of the natural world in this incredible evolution story set in the Galápagos Islands. The back matter features key terms, a timeline, and further resources for research.

This beautiful homage conveys complex ideas in concrete ways so children can witness how these extraordinary tortoises survived so long in their particular habitats. Splendid. — Shelf Awareness (Starred Review)

Skillfully capturing the concept of adaptation in natural selection, this succinct story continues its creators’ tradition of inspiring awe and appreciation for the natural world. — Publishers Weekly (starred review)

Minor’s painterly illustrations showcase the changing setting and the magnificence of the tortoises. — The Horn Book

Wendell Minor is nationally known for the artwork he has created for over sixty award-winning children’s books. His many collaborators include Jean Craighead George, Robert Burleigh, Buzz Aldrin, Tony Johnston, Nikki Grimes, Mary Higgins Clark, and, last but not least, his wife, Florence. He is also the author and illustrator of My Farm Friends.