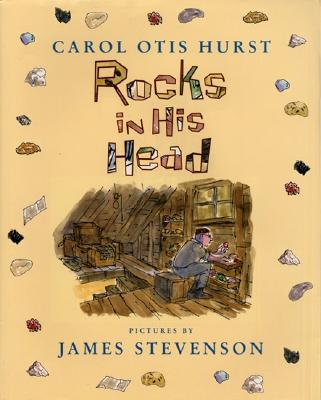 Rocks in His Head

Anyone who has ever felt a little out of step with the world will identify with this true story of a man who followed his heart and his passion. This nonfiction picture book is an excellent choice to share during homeschooling, in particular for children ages 6 to 8. It’s a fun way to learn to read and as a supplement for activity books for children.

Some people collect stamps. Other people collect coins. Carol Otis Hurst's father collected rocks. Nobody ever thought his obsession would amount to anything. They said, "You've got rocks in your head" and "There's no money in rocks." But year after year he kept on collecting, trading, displaying, and labeling his rocks. The Depression forced the family to sell their gas station and their house, but his interest in rocks never wavered. And in the end the science museum he had visited so often realized that a person with rocks in his head was just what was needed.

Carol Otis Hurst is a storyteller, teacher, children's book critic, and columnist for Teaching K-8 Magazine. She is the author of the Boston Globe-Horn Book Honor Book Rocks in His Head.