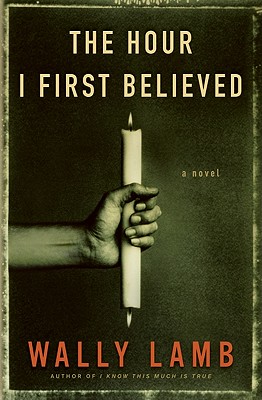 The Hour I First Believed (Hardcover)

Wally Lamb's two previous novels, She's Come Undone and I Know This Much Is True, struck a chord with readers. They responded to the intensely introspective nature of the books, and to their lively narrative styles and biting humor. One critic called Wally Lamb a "modern-day Dostoyevsky," whose characters struggle not only with their respective pasts, but with a "mocking, sadistic God" in whom they don't believe but to whom they turn, nevertheless, in times of trouble (New York Times).

In his new novel, The Hour I First Believed, Lamb travels well beyond his earlier work and embodies in his fiction myth, psychology, family history stretching back many generations, and the questions of faith that lie at the heart of everyday life. The result is an extraordinary tour de force, at once a meditation on the human condition and an unflinching yet compassionate evocation of character.

When forty-seven-year-old high school teacher Caelum Quirk and his younger wife, Maureen, a school nurse, move to Littleton, Colorado, they both get jobs at Columbine High School. In April 1999, Caelum returns home to Three Rivers, Connecticut, to be with his aunt who has just had a stroke. But Maureen finds herself in the school library at Columbine, cowering in a cabinet and expecting to be killed, as two vengeful students go on a carefully premeditated, murderous rampage. Miraculously she survives, but at a cost: she is unable to recover from the trauma. Caelum and Maureen flee Colorado and return to an illusion of safety at the Quirk family farm in Three Rivers. But the effects of chaos are not so easily put right, and further tragedy ensues.

While Maureen fights to regain her sanity, Caelum discovers a cache of old diaries, letters, and newspaper clippings in an upstairs bedroom of his family's house. The colorful and intriguing story they recount spans five generations of Quirk family ancestors, from the Civil War era to Caelum's own troubled childhood. Piece by piece, Caelum reconstructs the lives of the women and men whose legacy he bears. Unimaginable secrets emerge; long-buried fear, anger, guilt, and grief rise to the surface.

As Caelum grapples with unexpected and confounding revelations from the past, he also struggles to fashion a future out of the ashes of tragedy. His personal quest for meaning and faith becomes a mythic journey that is at the same time quintessentially contemporary—and American.

The Hour I First Believed is a profound and heart-rending work of fiction. Wally Lamb proves himself a virtuoso storyteller, assembling a variety of voices and an ensemble of characters rich enough to evoke all of humanity.


Praise For The Hour I First Believed: A Novel…

“Lamb . . . has delivered a tour de force, his best yet. A”
— Entertainment Weekly

“A page-turner. . . . Lamb remains a storyteller at the top of his game.”
— Craig Wilson, USA Today

“Every character is rendered with vivid, utterly convincing depth. . . . A heck of a page-turner.”
— Dallas Morning News

“Lamb does an extraordinary job narrating some of the most terrifying tragedies of the past 10 years....an epic journey. Grade: A.”
— Rocky Mountain News

“When you put Lamb’s newest novel down, it will be reluctantly. It’s that good.”
— Knoxville News-Sentinel
or
Not Currently Available for Direct Purchase
Copyright © 2020 American Booksellers Association