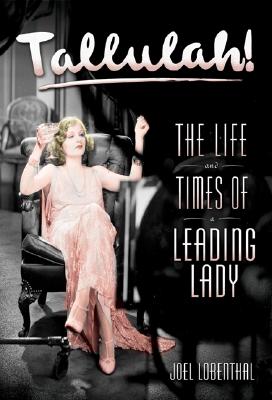 The Life and Times of a Leading Lady

Outrageous, outspoken, and uninhibited, Tallulah Bankhead was an actress known as much for her vices -- cocaine, alcohol, hysterical tirades, and scandalous affairs with both men and women -- as she was for her winning performances on stage. In 1917, a fifteen-year-old Bankhead boldly left her established Alabama political family and fled to New York City to sate her relentless need for attention and become a star. Five years later, she crossed the Atlantic, immediately taking her place as a fixture in British society and the most popular actress in London's West End. By the time she returned to America in the 1930s, she was infamous for throwing marathon parties, bedding her favorite costars, and neglecting to keep her escapades a secret from the press. At times, her notoriety distracted her audience from her formidable talent and achievements on stage and dampened the critical re-sponse to her work. As Bankhead herself put it, "they like me to 'Tallulah,' you know -- dance and sing and romp and fluff my hair and play reckless parts." Still, her reputation as a wild, witty, over-the-top leading lady persisted until the end of her life at the age of sixty-six.

From her friendships with such entertainment luminaries as Tennessee Williams, Estelle Winwood, Billie Holiday, Noël Coward, and Marlene Dietrich, to the intimate details of her family relationships and her string of doomed romances, Joel Lobenthal has captured the private essence of the most public star during theater's golden age. Larger-than-life as she was, friends saw through Bankhead's veneer of humor and high times to the heart of a woman who often felt second-best in her father's eyes, who longed for the children she was unableto bear, and who forced herself into the spotlight to hide her deep-seated insecurities.

Drawn from scores of exclusive interviews, as well as previously untapped information from Scotland Yard and the FBI, this is the essential biography of Tallulah Bankhead. Having spent twenty-five years researching Bankhead's life, Joel Lobenthal tells her unadulterated story, as told to him by her closest friends, enemies, lovers, and employees. Several have broken decadelong silences; many have given Lobenthal their final interviews. The result is the story of a woman more complex, more shocking, and yet more nuanced than her notorious legend suggests.

Joel Lobenthal is assistant editor of Ballet Review, and has also written for Dance Magazine, Playbill, Quest, and the New York Times. He is the author of Radical Rags: Fashions of the Sixties.