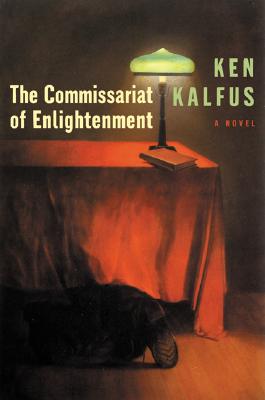 The Commissariat of Enlightenment

With this remarkable debut novel, Ken Kalfus gives us a stunning triumph of invention -- an epic story about the death of two Russian visionaries, the life of a radical antihero, and the birth of a new kind of power.

It begins in 1910 in Astapovo, a remote Russian railway station, where Leo Tolstoy lies dying of pneumonia. Members of the press from around the world have descended upon this sleepy hamlet to record his passing for a public suddenly ravenous for celebrity news. They have been joined by a film company whose young assistant, Nikolai Gribshin, is capturing the extraordinary scene and learning how to wield a camera as a political tool. At this historic moment he comes across two men -- the scientist, Professor Vorobev, and the revolutionist, Joseph Stalin -- who have bold, mysterious plans for the future that will inevitably involve him. With the coming of the Russian Revolution, Gribshin takes on the nom de guerre Comrade Astapov and joins the Bolshevik ministry of propaganda. In league now with Stalin and Vorobev, he plots to kill Lenin and glorify his embalmed body, promoting a vision of lifeless immortality that will dominate the minds of millions. In this brutal, absurd age, Gribshin seeks to transform himself and redirect the course of history.

Displaying the same mastery of form and intimate knowledge of Russian culture that distinguished his award- winning short stories, Ken Kalfus has produced a work of grand scope and ambition. The Commissariat of Enlightenment is a mesmerizing novel of ideas that brilliantly links the tragedy and comedy of the Russian Revolution with the global empire of images that occupies our imaginations today. Filled with intelligence, humor, and rich, vivid storytelling, it firmly establishes Ken Kalfus as one of our most daring and talented writers.