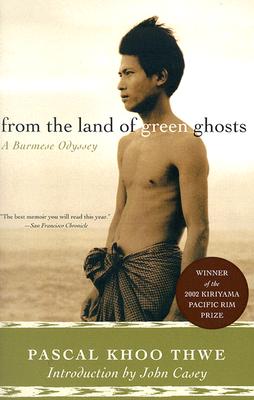 From the Land of Green Ghosts (Paperback)

It was during a tour on a trip through Burma that John Casey, a Cambridge don, first met Pascal Khoo Thwe, who was moonlighting in a Chinese restaurant to support himself as a student at Mandalay University. Thwe was born a member of the Padaung tribe in Burma where political turmoil and poverty are ever-present realities.

Thwe left school to join the student rebels during the great insurrection of 1988, but remained in touch with Casey. He was forced to flee the country. It was his connection to Casey that enabled him to emigrate to England where he was admitted to Cambridge University. Despite his humble beginnings and the oppression he faced, Pascal Khoo Thwe brings us into a world forgotten by the West, but one that readers will not soon forget.

Pascal Khoo Thwe was born in 1967 in a remote part of Burma's Shan States. In 1989 he left for England and studied English at Cambridge University. He now lives in London. This is his first book.


Praise For From the Land of Green Ghosts: A Burmese Odyssey…

“A political statement as well as a poetic lament, the book is a true work of art.”
— Financial Times

“A page-turner…deeply moving, beautifully written, and most inspiring. My heart was filled with joy and gratitude.”
— Nien Chang, author of Life and Death in Shanghai

“A magical story, full of richness and subtlety, told with the instinctive touch of a true writer.”
— Mail on Sunday

“The best memoir you will read this year.”
— San Francisco Chronicle

“Unique as much for the riveting story it tells as for the sublime way it is told.“
— Seattle Times