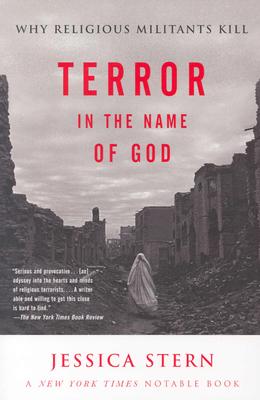 Terror in the Name of God

For four years, Jessica Stern interviewed extremist members of three religions around the world: Christians, Jews, and Muslims. Traveling extensively—to refugee camps in Lebanon, to religious schools in Pakistan, to prisons in Amman, Asqelon, and Pensacola—she discovered that the Islamic jihadi in the mountains of Pakistan and the Christian fundamentalist bomber in Oklahoma have much in common.

Based on her vast research, Stern lucidly explains how terrorist organizations are formed by opportunistic leaders who—using religion as both motivation and justification—recruit the disenfranchised. She depicts how moral fervor is transformed into sophisticated organizations that strive for money, power, and attention.

Jessica Stern's extensive interaction with the faces behind the terror provide unprecedented insight into acts of inexplicable horror, and enable her to suggest how terrorism can most effectively be countered.

A crucial book on terrorism, Terror in the Name of God is a brilliant and thought-provoking work.


Praise For Terror in the Name of God: Why Religious Militants Kill…

“A significant addition to a growing shelf of timely books on terrorism.” — Christian Science Monitor

Jessica Stern is a leading expert on terrorism and trauma. Stern is the coauthor with J. M. Berger of ISIS: The State of Terror and the author of Denial: A Memoir of Terror and Terror in the Name of God: Why Religious Militants Kill, selected by the New York Times as a notable book of the year. She has held fellowships awarded by the Guggenheim Foundation, the Erikson Institute, and the MacArthur Foundation. She was a Council on Foreign Relations International Affairs Fellow, a national fellow at Stanford University’s Hoover Institution, and a fellow of the World Economic Forum. Stern is a research professor at Boston University. Prior to teaching, she worked in government, serving on President Clinton’s National Security Council Staff and as an analyst at Lawrence Livermore National Laboratory.