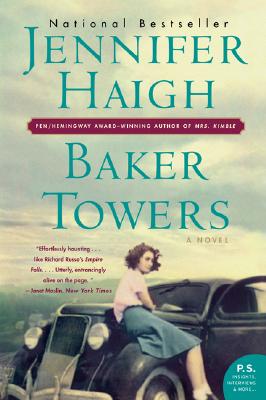 Bakerton is a community of company houses and church festivals, of union squabbles and firemen's parades. Its neighborhoods include Little Italy, Swedetown, and Polish Hill. For its tight-knit citizens -- and the five children of the Novak family -- the 1940s will be a decade of excitement, tragedy, and stunning change. Baker Towers is a family saga and a love story, a hymn to a time and place long gone, to America's industrial past, and to the men and women we now call the Greatest Generation. It is a feat of imagination from an extraordinary voice in American fiction, a writer of enormous power and skill.


Praise For Baker Towers: A Novel…

“The living, breathing organism that is Haigh’s captivating book… [is an] effortlessly haunting story… [Haigh is] an expert natural storyteller.”
— New York Times

“[Haigh] writes convincingly of family and small town relations, as well as of the intractable frustrations of American poverty.”
— Publishers Weekly

“A good old-fashioned read... the author deftly evokes the particulars of a time and place.”
— Daily News

“Haigh’s writing is rich and mellifluous, and her story certainly has an old-fashioned charm and dignity to it.”
— The Times (London)

“A work that is quickly boosting [Haigh’s] ascension to the vanguard of 21st century American novelists.”
— Patriot Ledger (Quincy, MA)