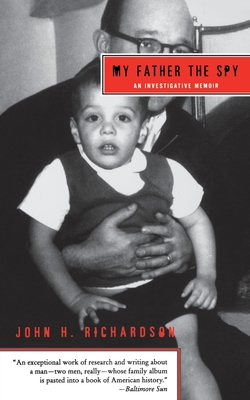 My Father the Spy

As his father nears death in his retirement home in Mexico, John H. Richardson begins to unravel a life filled with drama and secrecy. John Sr. was a CIA "chief of station" on some of the hottest assignments of the Cold War, from the back alleys of occupied Vienna to the jungles of the Philippines—and especially Saigon, where he became a pivotal player in the turning point of the Vietnam War: the overthrow of South Vietnamese president Ngo Dinh Diem. As John Jr. and his sister came of age in exotic postings across the world, they struggled to accommodate themselves to their driven, distant father, and their conflict opens a window on the tumult of the sixties and Vietnam.

Through the daily happenings at home and his father's actions, reconstructed from declassified documents as well as extensive interviews with former spies and government officials, Richardson reveals the innermost workings of a family enmeshed in the Cold War—and the deeper war that turns the world of the fathers into the world of the sons.


Praise For My Father the Spy: An Investigative Memoir…

“A beautiful, gracious act of connection with a man who kept his secrets.” — Kirkus Reviews

Readers will not only find absorbing narratives but also the early signs of America’s now highly contentious culture wars. — Booklist

An exceptional work ... about a man ... whose family album is pasted into a book of American history. — Baltimore Sun

John H. Richardson is a writer-at-large for Esquire and the author of In the Little World and The Viper's Club. His fiction has appeared in the Atlantic Monthly and the O. Henry Prize Stories collection. He lives in Katonah, New York.