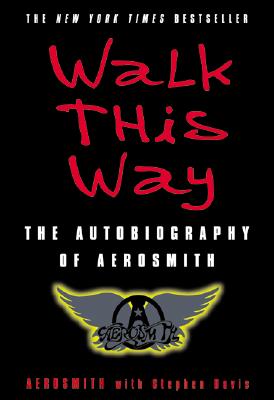 The Autobiography of Aerosmith

Walk This Way: The Autobiography of Aerosmith is available in time for the Aerosmith's 40th Anniversary. It's the New York Times bestselling autobiography by the legendary rock group that lived by the motto "Anything worth doing was worth overdoing." Aerosmith shook the music world out of its '70s doldrums…and made living on the edge an art form. Walk This Way is the complete and candid story of their meteoric rise to fame, their near destruction due to drugs and excess, and their return to the stage as one of America's greatest rock bands. Cowritten by respected rock journalist Stephen Davis, author of the seminal profile of Led Zeppelin, Hammer of the Gods, and with a new afterward from the band, this edition of the memoir to end all rock memoirs is the perfect  gift for you and your favorite Aerosmith fan.

Stephen Davis is also the author of the New York Times bestsellers Walk This Way and Fleetwood. Other books include Jim Morrison, Bob Marley, and Old Gods Almost Dead: The 40-Year Odyssey of the Rolling Stones. He lives near Boston, Massachusetts.