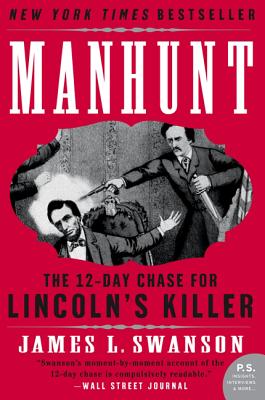 The 12-Day Chase for Lincoln's Killer

Soon to be an Apple TV Series

“James Swanson has written a terrific narrative of the hunt for Lincoln’s killers that will mesmerize the reader from start to finish just as the actual manhunt mesmerized the entire nation. It is a triumphant book.”—Doris Kearns Goodwin

The murder of Abraham Lincoln set off the greatest manhunt in American history--the pursuit and capture of John Wilkes Booth. From April 14 to April 26, 1865, the assassin led Union cavalry troops on a wild, 12-day chase from the streets of Washington, D.C., across the swamps of Maryland, and into the forests of Virginia, while the nation, still reeling from the just-ended Civil War, watched in horror and sadness.

Based on rare archival materials, obscure trial transcripts, and Lincoln’s own blood relics Manhunt is a fully documented, fascinating tale of murder, intrigue, and betrayal. A gripping hour-by-hour account told through the eyes of the hunted and the hunters, it is history as it’s never been read before.


Praise For Manhunt: The 12-Day Chase for Lincoln's Killer…

James Swanson is the Edgar Award-winning author of the New York Times bestsellers Manhunt and its sequel, Bloody Crimes.