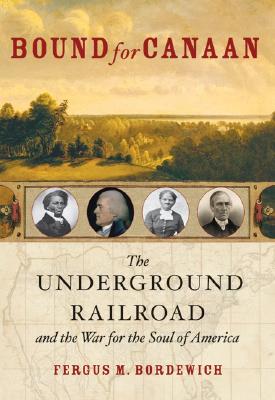 The Underground Railroad and the War for the Soul of America

The civil war brought to a climax the country's bitter division. But the beginnings of slavery's denouement can be traced to a courageous band of ordinary Americans, black and white, slave and free, who joined forces to create what would come to be known as the Underground Railroad, a movement that occupies as romantic a place in the nation's imagination as the Lewis and Clark expedition. The true story of Harriet Tubamn and the Underground Railroad is much more morally complex and politically divisive than even the myths suggest. Against a backdrop of the country's westward expansion arose a fierce clash of values that was nothing less than a war for the country's soul. Not since the American Revolution had the country engaged in an act of such vast and profound civil disobedience that not only challenged prevailing mores but also subverted federal law.

Bound for Canaan tells the stories of men and women like David Ruggles, who invented the black underground in New York City; bold Quakers like Isaac Hopper and Levi Coffin, who risked their lives to build the Underground Railroad; and the inimitable Harriet Tubman, soon to be the first African American featured on American currency. Interweaving thrilling personal stories with the politics of slavery and abolition, Bound for Canaan shows how the Underground Railroad gave birth to this country's first racially integrated, religiously inspired movement for social change.

Fergus M. Bordewich is the author of several books, including Bound for Canaan, Killing the White Man's Indian, and My Mother's Ghost, a memoir. The son of a national civil rights leader for Native Americans, he was introduced early in life to racial politics. As a journalist, he has written widely on political and cultural subjects in Europe, the Middle East, and East Asia. His articles have appeared in the New York Times, Wall Street Journal, Smithsonian, American Heritage, Atlantic Monthly, Harper's, Reader's Digest, and many other publications. He was born in New York City, and now lives in New York's Hudson River Valley with his wife and daughter.


Praise For Bound for Canaan: The Underground Railroad and the War for the Soul of America…

“A vivid reconstruction of abolitionism’s most daring act of rebellion...”
— Kirkus Reviews (starred)

“Rich in detail and solid storytelling: sure to awaken interest in the peculiar anti-institution.”
— Kirkus Reviews (starred)

“Rich in detail, [and] its ability to evoke the emotions, sights and sounds of these clandestine ventures.”
— Black Issues Book Review

“Dramatizes a shining moment in American history-- a book filled with unsung heroes and revolutionary acts of trust.”
— O magazine

“Bound for Canaan recaptures this grand history with the insightfulness, comprehensiveness, and narrative vigor the subject demands.”
— David Levering Lewis, Pulitzer Prize-winning author of the two-volume life of W. E. B. Du Bois

“Bound For Canaan reveals in stunning detail and beautiful prose the inner workings of this clandestine system.”
— --Kate Clifford, Ph.D. author of Bound for the Promised Land: Harriet Tubman, Portrait of an American Hero

“This fast-paced narrative is the best account we have of the network known as the Underground Railroad.”
— --James McPherson, author of Battle Cry of Freedom: The Civil War Era

“An excellent book . . .as close to a definitive history as we’re likely to see.”
— Wall Street Journal

“An important addition to our history, brilliantly told.”
— Atlanta Journal-Constitution

“Engrossing account of the Underground Railroad.”
— The New Yorker

“Bordewich brings to his account [of the Underghround Railroad] the moral seriousness it deserves.”
— New York Review of Books