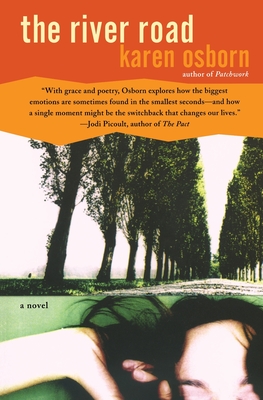 David and Michael Sanderson are brothers, inseparable since childhood from each other and from their neighbor Kay Richards, a complicated young woman involved in a passionate and obsessive love affair with David. One spring night, while at home on a break from college, the threesome embarks on a night of adventure and experimentation, driving recklessly through the Connecticut Valley. Stopping at the French King Bridge, David -- full of hubris and hallucinogens -- dares to jump, mistakenly believing he'll be able to swim ashore. With this one act, he sets in motion an inexorable chain of events that indelibly alters the lives of everyone involved.

Told through the alternating voices of Kay, Michael, and David's father, Kevin, The River Road is a closely observed and psychologically penetrating narrative of the accusations, murder investigation, and courtroom battle that follow.

Award-winning poet Karen Osborn grew up on Grand Island, New York, where she lived in a rural area along the banks of the Niagara River. She graduated from Hollins College, an all-women's college in the Blue Ridge Mountains of Virginia, and went to graduate school in the Ozarks of Arkansas. Since then she has lived in both the southeast and New England and has taught literature and creative writing at several colleges and universities. She is the author of two previous novels, Patchwork, a New York Times Notable Book of the Year, and Between Earth and Sky. She lives in Amherst, Massachusetts, with her husband and two daughters.