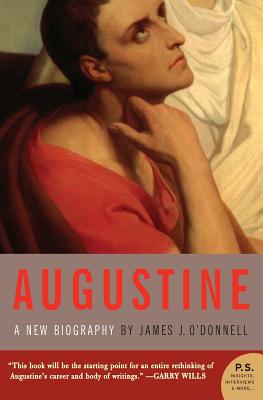 Saint Augustine -- the celebrated theologian who served as Bishop of Hippo from 396 C.E. until his death in 430 C.E. -- is widely regarded as one of the most influential thinkers in the Western world. His autobiography, Confessions, remains among the most important religious writings in the Christian tradition. In this eye-opening and eminently readable biography, renowned historical scholar James J. O’Donnell picks up where Augustine himself left off to offer a fascinating, in-depth portrait of an unparalleled politician, writer, and churchman in a time of uncertainty and religious turmoil.

Augustine is a triumphant chronicle of an extraordinary life that is certain to surprise and enlighten even those who believed they knew the complex and remarkable man of God.

James J. O'donnell is a classicist who served for ten years as Provost of Georgetown University and is now University Librarian at Arizona State University. He is the author of several books including Augustine, The Ruin of the Roman Empire, and Avatars of the Word. He is the former president of the American Philological Association, a Fellow of the Medieval Academy of America, and the chair of the Board of Directors of the American Council of Learned Societies. He is seen here at an ancient monastery on the eastern frontier of the Roman Empire, in Syria.