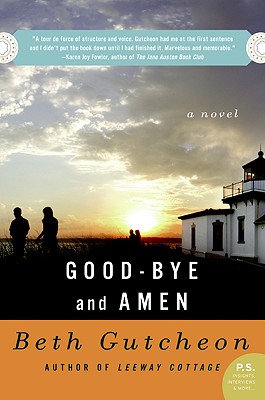 In a summer cottage on the coast of Maine, an unlikely love was nurtured, a marriage endured, and a family survived. Now it is time for the children of that marriage to make peace with the wounds and the treasures left to them. And to sort out which is which.

The complicated marriage of the gifted Danish pianist Laurus Moss to the provincial American child of privilege Sydney Brant was a mystery to many who knew them, including their three children. Now Eleanor, Monica, and Jimmy Moss have to decide how to divide or share what Laurus and Sydney have left them without losing one another.


Praise For Good-bye and Amen: A Novel…

“Gutcheon’s gift is for pure storytelling. . . . Her characters and settngs are alive, sparkling with deft touches of period detail; her narrative voice is knowing and wry, exasperated and affectionate.” — New York Newsday

“Good-Bye and Amen is a tour de force of structure and voice. Gutcheon had me at the first sentence and I didn’t put the book down until I had finished it. Marvelous and memorable.” — Karen Joy Fowler, author of Wit’s End and The Jane Austen Book Club

“[C]ompelling…Beautifully written and told from varying points of view, this sweeping saga will strike a chord with anyone who loves to read about family. Four stars.” — Romantic Times on GOOD-BYE AND AMEN