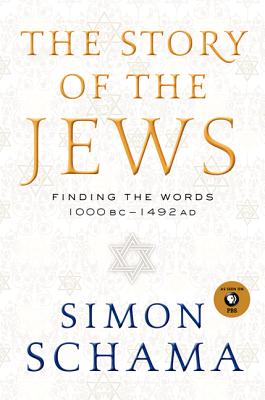 The Story of the Jews

In this magnificently illustrated cultural history—the tie-in to the PBS and BBC series The Story of the Jews—Simon Schama details the story of the Jewish experience, tracing it across three millennia, from their beginnings as an ancient tribal people to the opening of the New World in 1492 to the modern day.

It is a story like no other: an epic of endurance against destruction, of creativity in oppression, joy amidst grief, the affirmation of life against the steepest of odds.

It spans the millennia and the continents—from India to Andalusia and from the bazaars of Cairo to the streets of Oxford. It takes you to unimagined places: to a Jewish kingdom in the mountains of southern Arabia; a Syrian synagogue glowing with radiant wall paintings; the palm groves of the Jewish dead in the Roman catacombs. And its voices ring loud and clear, from the severities and ecstasies of the Bible writers to the love poems of wine bibbers in a garden in Muslim Spain.

In The Story of the Jews, the Talmud burns in the streets of Paris, massed gibbets hang over the streets of medieval London, a Majorcan illuminator redraws the world; candles are lit, chants are sung, mules are packed, ships loaded with spice and gems founder at sea.

And a great story unfolds. Not—as often imagined—of a culture apart, but of a Jewish world immersed in and imprinted by the peoples among whom they have dwelled, from the Egyptians to the Greeks, from the Arabs to the Christians.

Which makes the story of the Jews everyone's story, too.

“Award-winning Columbia University historian Schama . . . brings to bear his gift for synthesizing mountains of information into a well-crafted, accessible narrative in this impressive volume that spans nearly 2,500 years and serves as a companion volume to a PBS series.”
— Publishers Weekly (starred review)

“In his brilliant new history of the Jews, the unconventional scholar somehow manages to be simultaneously sentimental and subversive, consensual and contrarian - and we readers are the beneficiaries.”
— Haaretz (English edition)

“Schama writes history from below, and from the middle and other unexpected angles, resurrecting the unrecorded and long-forgotten, and analyzing the social and cultural forces that shaped his subjects’ lives… [he] has pulled it off with opinionated flair and literary grace.”
— New York Times Book Review

“Schama is a historian of prodigious and varied gifts. He can take a specific subject and drill deep; he can take a wide-angled view of many countries over long periods of time. He does both in this excellent first volume… Revealing and moving.”
— San Francisco Chronicle

Simon Schama is University Professor of Art History and History at Columbia University in New York. His award-winning books include Scribble, Scribble, Scribble; The American Future: A History; National Book Critics Circle Award winner Rough Crossings; The Power of Art; The Embarrassment of Riches: An Interpretation of Dutch Culture in the Golden Age; Citizens: A Chronicle of the French Revolution; Dead Certainties (Unwarranted Speculations); Landscape and Memory; Rembrandt's Eyes; and the History of Britain trilogy. He has written and presented forty television documentary films for the BBC, PBS, and The History Channel, including the Emmy-winning Power of Art, on subjects that range from John Donne to Tolstoy.