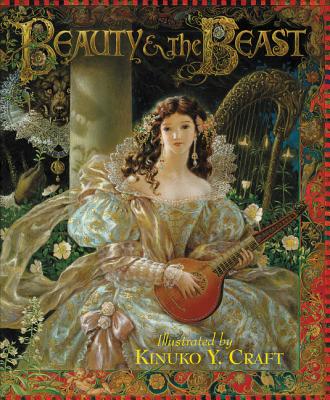 Beauty and the Beast

Award-winning team Mahlon and Kinuko Craft bring us a gorgeous and vivid retelling of the classic story of Beauty and the Beast in this stunningly illustrated picture book.

The tale is as old as time: A man steals a rose from the garden of a beast. His beautiful daughter sacrifices herself to a life in the beast’s castle to protect her father. The beast and the girl fall in love and live happily ever after…

This beloved tale is captured with lyrical prose and lavish illustration. In the spirit of the Crafts’ previous collaborations, their acclaimed fairy-tale retellings of Cinderella and Sleeping Beauty, this timeless tale is brought to life with sumptuous paintings and ornamental detail in this lush picture book to be cherished at story time again and again.


Praise For Beauty and the Beast…

Effectively captures the mystery and magic of this tale in lyrical language. The illustrations are nothing short of gorgeous. There is a certain misty luminosity that carries readers into this forest of illusion.
— School Library Journal

Mahlon F. Craft came to writing late in life. Beauty and the Beast is his second published work as an author. He is a graduate of the Art Academy of Cincinnati. After completing postgraduate studies at the School of the Art Institute of Chicago in the 1960s, he worked as an award-winning art director and graphic designer. Beauty and the Beast is the ninth picture book of his design.