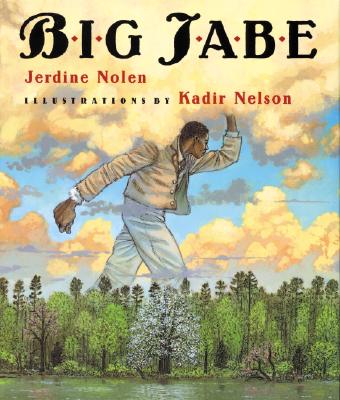 Multiple starred reviews greeted this beautiful picture book with art from Caldecott Medalist Kadir Nelson. This tall tale about a boy who grows to become a hero during slavery times can be shared at home or in the classroom.

When a young slave named Addy goes fishing one spring day, she doesn't catch any fish. Instead, she finds a little boy in a basket floating in the river.

Jabe is no ordinary boy: in a few short months, he grows to be a big, strong man with the strength of fifty. He can pick an entire field of cotton by himself in just one night and day. When slaves begin to miraculously disappear from the Plenty Plantation, Addy knows in her heart that Jabe is the reason why...

Kadir Nelson's acclaimed books include The Undefeated, winner of the Caldecott Medal as the most distinguished picture book of the year, Heart and Soul: The Story of America and African Americans, and Moses: When Harriet Tubman Led Her People to Freedom.

“Freshly inspiring. This eloquent tale neither demeans the characters nor forces readers to identify directly with the character’s suffering. Instead, the author and artist empower the audience to confront an unbearable history and come away with hope.” — Publishers Weekly (starred review)

“Part magical savior, part tall-tale hero, Big Jabe personifies the tri­umph of African Americans who (miraculously it must sometimes have seemed) escaped from slavery. Jerdine Nolen recounts her original tale with a light touch and lyrical voice that add depth and resonance to its telling imagery and serious overtones. This powerful story will be particularly effective shared aloud.”  — Horn Book (starred review)

"Big Jabe seems not just larger than life, but a force of nature, subtle, secret, untouchable—and that undercurrent of mystery gives his story a mythic power." — Kirkus Reviews (starred review)

"[Nelson's] finely hatched watercolor and gouache illustrations emphasize images of slave life; when he does depict Big Jabe's fantastic feats, his naturalistic style permits him to depict them with an apparent realism. Author and artist empower the audience to confront an unbearable history and come away with hope." — Bulletin of the Center for Children’s Books

"Part Moses, part John Henry, the man who leads the slaves to freedom in this original tall tale first appears on the plantation as a smiling little buy floating in a basket on the river. In just a few months he has grown into the giant, Jabe, with the strength of 50. Nolen dramatizes the strength of community and of story. Nelson's full-page pictures in ink, watercolor, and gouache show life in the Quarters and also the wild glory of the natural world that gives Big Jabe his mythic power." — Booklist

"Tall-tale-hero Jabe is informed by echoes of traditional folk heroes like High John the Conquerer, John Henry, and old Toby from 'The People Could Fly.' Nelson's illustrations evoke a sense of bucolic beauty on the one hand and tall-tale merriment on the other." — Bulletin of the Center for Children’s Books

“This book will be truly enjoyed by all ages.” — Multicultural Review

"Tall-tale-hero Jabe is informed by echoes of traditional folk heroes like High John the Conqueror,John Henry, and old Toby from the African-American folktale 'The People Could Fly.' The final illustration of Big Jabe walking through the woods, towering over the trees, is a fitting image of this new hero." — Bulletin of the Center for Children’s Books